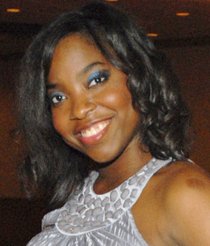 Loving daughter, constant writer, pageant lover, effective manager, and community advocate are just some of the characteristics that describe Jo-Carolyn Goode. Having a solid foundation forged by her parents and faith in God has helped shape her into the pillar of the community she is today. The Houston, Texas native is a Prairie View A&M University graduate with a B.S. in the concentration of Biology with minor in Chemistry and Dance.

Beginning her professional career with Houston Style Magazine as an editorial intern, she worked her way through the ranks to become Managing Editor. Through a proven track record of excellent timely reporting and having a great worth ethic, Jo-Carolyn tells the stories of the everyday man to the hottest celebrities to the political power movers. While overseeing a talented team of writers and photographers, Jo-Carolyn produces the weekly print publication of Houston Style Magazine that is widely distributed locally, regionally, and nationally. In addition, she engages readers with stellar content through Houston Style Magazine’s online portal and social media channels.

Her communication talents move from the pages of print media to video as the producer for ‘It's National Day,’ a popular YouTube show celebrating the different national days of the world hosted by media personality TotallyRandie.

Jo-Carolyn has a passion for mentoring the minds of young girls and women and exercises this in a number of ways. In the capacity of National Assistant Director of the Miss Black America Coed Pageant Jo-Carolyn works with girls as young as five helping them to learn the ways of a queen through modeling, interviewing, and serving their respective communities. She also volunteers for the Miss Texas USA Pageant and Miss Texas Teen USA Pageant system where she works with girls as young as 14. Jo-Carolyn builds girls of confidence and character as a Girl Scout leader for one of the oldest African American troops in the Houston area. Her mentorship to these various groups of girls has allowed them to learn valuable lessons and gain skills that have translated to other areas of their lives to live and grow as successful individuals.

Always involved in her community, Jo-Carolyn has affiliations with Alpha Kappa Alpha Sorority, Incorporated - Alpha Kappa Omega Chapter as the chapter historian and sits on the Board of Directors for the Ivy Educational and Charitable Foundation of Houston, Incorporated and the Advisory Board for the Beatrice Mayes Institute.

Early Voting Comes to a Close As Election Day Approaches

The pavement is being worn out with campaign workers hitting the streets to knock on doors and voters standing up for what they believe in at the polls. Only a few more days are left to vote before the November 8th Election when we find if Texas will remain a red state under the Greg Abbott administration or if the tide will turn blue with Beto O’Rourke at the helm.E

You want a wake-up call about your health? How about the fact that the life expectancy of Americans has decreased by 2.6 years due to the way we live, and this is the number before COVID-19. Why has this happened? According to board certified cardiologist Dr. Baxter Montgomery, it is because of the food we eat. He is surprised that we are not sicker than we are with all the food we consume that is loaded with preservatives and chemicals. It all is enough to make you sick just thinking about.

Five Places to Get Your Coffee Fix and Work

A hot, rich coffee is the morning wake up cup for many Americans. Some can make a masterful brew in their own homes complete with flavorings and whipped cream. However, there is nothing like going into a coffee house and having that smell of coffee beans being grind and brewed. Coffee houses have grown in popularity because of the smell but also because of the space itself.

Kizik: The Last Tennis Shoes You’ll Ever What to Buy

At one point in time, tennis shoes were not always as high tech and complicated as they are today. However, advancements in technology have motivated shoe designers to push the envelope when it comes to comfort, style, and functionality. Now tennis shoes are just as acceptable at work and formal occasion as they are at the gym. Even with this new range of acceptability has not cause shoe designers to stop pushing to continue to create some of the most innovative shoes of our time. In steps Kizik taking their shot to make sneaker culture history with their patented hands-free technology.

Sex trafficking has always been one of those silent problems within a city. Victims are often scared to secrecy over threats to harm them, their families, and friends. Or they remain silent because they lost hope of ever being rescued. And there are even more reasons that we may never know. It is because of this restraint to speak that so many victims just drift away in the darkness and suffer in silence.

A boxer never steps into any ring ill-prepared. Muscles in their body must be trained for weeks to condition the body, build endurance, and enhance speed. The mind must be trained to focus. If a boxer believes they are stronger and faster than their opponent, they have already lost the fight. But how do you prepare for a fight when you know nothing about your opponent? There is no time to plan a strategy. It’s as if you are being sucker-punched from the get-go, leaving you confused – Is your on-the-defense mechanism to bob and weave or duck and jab? How does you prepare for the fight of your life?

When people of color went out to discover more for themselves in the early 1920s, there weren’t a lot of open doors but closed ones. Opportunities were few, and there weren’t many individuals with extended hands to show them the way. However, a courageous few found opportunity tucked away in the heart of Third Ward at a place to be called Texas Southern University.

Top Places to Get Your French Fry Fix On

Easily one of the weaknesses of any food lover must be a batch of hot, golden, crispy French fries. That’s one of the ways McDonald’s rosed in popularity. But that was kids’ stuff (no shade McDonald’s you will always be the original king of fries) compared to the gourmet delicacies being served today. Fries are not merge side dishes adding to the shine of entrees.

Plumshuga: The Rise of Lauren Anderson

The lights and glitz of a celebrity's life can have one blinded to the hard times that happen when the lights off. We don't see their struggles, temptations, and the downside to fame. Prima ballerina Lauren Anderson twirled and leaped on some of the world's most renowned stages all while hiding behind dark clouds of body shaming, discrimination, and her personal demon, alcoholism. In Stages Theatre's groundbreaking production, they explore Anderson's secret addition to alcohol that almost ended her career and took her life.

Women are tall, short, voluptuous, skinny, sassy, classy, smart…in other words multifaceted individuals who don’t fit a certain mold and can’t be boxed, so why try? Just continue to make spaces where she always has a seat at the head of the table (Yall, caught that?), her voice is never silence and her opinion never ignored.