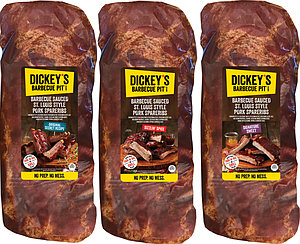 No matter where you are in the world, Dickey’s Barbecue Pit wants to bring Legit. Texas. Barbecue.™ to you. Now, by popular demand, Dickey’s is proud to say aloha to the Hawaiian Islands with their pit-smoked ribs!

Over the summer, the Texas-style BBQ brand began selling Original, Sizzlin’ Spice and Signature Sweet St. Louis Style Ribs in Puerto Rico and Hong Kong and saw immediate success. Due to the exponential growth experienced in the past year, the Hawaiian Islands can now find Dickey’s mouthwatering ribs at their ‘cue-mmunity Times Supermarkets as well.

Dickey’s bake-in-a-bag ribs are oven-safe and require no prep with no mess. So, no need to stress about being the pitmaster for your fall cookouts or game-day tailgates. Just let Dickey’s do the work while your guests rave about “your” fall-off-the-bone ribs!

“We’re proud to expand our retail line and bring more Legit. Texas. Barbecue.™ to the people of Hawaii,” said Roland Dickey Jr., CEO of Dickey's Capital Group. “The response we saw after our launch in Puerto Rico and Hong Kong shows that the demand for delicious, tender pork ribs is undeniable. With the unmatched convenience and flavors of our ribs, barbecue lovers can be the ultimate pitmasters at home.”

Dickey's Barbecue Restaurants, Inc., the world’s largest barbecue concept, was founded in 1941 by the Dickey family. For the past 80 years, Dickey’s Barbecue Pit has served millions of guests in 44 states Legit. Texas. Barbecue.™ At Dickey’s, all our barbecued meats are smoked onsite in a hickory wood burning pit. Dickey’s proudly believes there’s no shortcut to true barbecue and it’s why our name isn’t BBQ. The Dallas-based, family-run barbecue franchise offers eight slow-smoked meats and 12 wholesome sides with 'No B.S. (Bad Stuff)' included. Dickey’s Barbecue has 550 locations across the United States and eight other countries.