Courage & Bravery at Its Finest

AVI-8 is honoured to partner with the Tuskegee Airmen Inc. (TAI) in designing a timepiece limited to just 300 pieces that pays tribute to the distinguished men and women who were part of the US Army Air Corps' landmark program to train African Americans to fly and maintain combat aircraft in WWII.

2022 marks the 80th anniversary of the activation of the famed 99th Pursuit Squadron which would become famous for being part of a collective of African American aviators known as the Tuskegee Airmen and Red Tails. 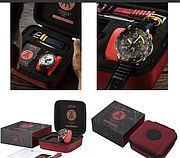 The 332nd Fighter Group flew P-51 Mustangs to escort the heavy bombers of the 15th Air Force during raids deep into enemy territory.

The tails, noses and rudders of their planes were painted red for identification purposes, earning them the enduring nickname “Red Tails.”

We're proud to support the work of the Tuskegee Airmen Inc. (TAI) as they focus on honoring the accomplishments and perpetuating the history of African Americans who participated in air crew, ground crew and operations support training in the Army Air Corps during WWII.

Each watch sold will contribute to the incredible work of the Tuskegee Airmen, including but not limited to their educational programs that help foster excitement and introduce young people across the nation to the world of aviation and science.

In commemorating the Tuskegee Airmen - we have redesigned our P 51 Mustang Meca-Quartz Chronograph to highlight and pay tribute to their skillful flying of the P-51 Mustang in the many theatres of European air conflict during WWII.

Crafted from solid stainless steel, a fluidly streamlined 43mm case showcases a custom-built crown guard, with micro-detailing inspired by the P-51 Mustang’s engine exhaust. Completing the case is a bezel with an etched tachymeter scale topped by a scratch resistant sapphire lens with anti-reflective coating.

A clear and legible dial is perfectly designed with aviation elements drawn from the Red Tails' P-51 Mustangs. The multi-layered dial with bold indexes and Swiss lumed hands is complemented by coloured minute tracks drawn from the nose art on the aircraft. The "Tuskegee Airmen" is stamped at the 1H position as a reminder of their legacy. Equipped with the reputable VK series Japanese Meca-Quartz movement, the Tuskegee Airmen Chronograph Limited Edition is armed with both the reliability of quartz chronograph timing along with the nostalgic hand feel of automatic movements.

Equipped with the reputable VK series Japanese Meca-Quartz movement, the Tuskegee Airmen Chronograph Limited Edition is armed with both the reliability of quartz chronograph timing along with the nostalgic hand feel of automatic movements.