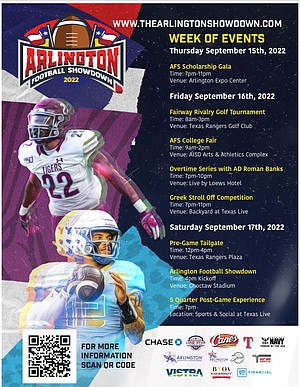 Southern University will play Texas Southern University in the 2nd Annual Arlington Football Showdown on September 17,2022 at Choctaw Stadium. It will be the first Historical Black College and University (HBCU) football classic of the year in North Texas. The game is presented by Lone Star Sports Inc in conjunction with the Texas Rangers/REV Entertainment.

The game will be the highlight of a three-day cultural event that will showcase the best that the City of Arlington has to offer for alums, sports enthusiasts and supporters of HBCU football while providing an economic boost to the city as fans from both schools descend upon Arlington to have a unique football and festival experience.

The range of events has garnered the support of local celebrities, athletes and politicians. Many notable constituents are planning to attend to support the HBCU movement and use the opportunity to encourage the youth on the importance of furthering their education.

For a complete list of festivities ranging from a much anticipated battle of the bands, scholarship gala, college fair, tailgating party, golf tournament and networking opportunity for students visit www.thearlingtonshowdown.com

WHO: Southern University vs Texas Southern

WHEN: September 17th at 4PM

About The Arlington Football Showdown