Early Voting Comes to a Close As Election Day Approaches 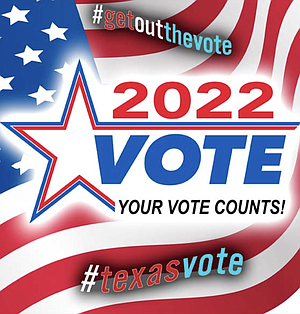 The pavement is being worn out with campaign workers hitting the streets to knock on doors and voters standing up for what they believe in at the polls. Only a few more days are left to vote before the November 8th Election when we find if Texas will remain a red state under the Greg Abbott administration or if the tide will turn blue with Beto O’Rourke at the helm. As of Tuesday, November 1st, more than 454,000 people have casted their votes in-person, a little over 46,000 mail ballots that have been returned for a total of 500,726 early voters out of the 2,575,270 registered voters as of October 27th. According to HarrisVotes.com, the highest turnout day was the first, with nearly 61K voting, and that number remained steady through the week, with a slow down this weekend. As far as peak times, we're seeing (as is typical) a spike in turnout during lunch hours followed by a second peak just as people are leaving work around 5-6 pm. There are still so many who need to vote as political power hangs in the balance.

Halfway through early voting saw a low in voter turnout than previous years but despite that the Harris County Elections Office still received complaints of long lines at some of the 99 polling locations. Some lines maybe lengthy if voters are not prepared to go through the longest ballot in the nation. Officials say voters need to estimate almost 7 minutes to complete ballot. That is why it is highly suggested that you bring a paper copy of the sample ballot with you with your notes inside the voter booth to streamline the process. Do your research before heading to the polls. Visiting HarrisVotes.com is a useful website for any votes that has everything one needs to know.

Harris County has 95 contests on the ballot, making it the longest in the United States. All Harris County voters are eligible to vote on state-wide races, County Judge contest, and bonds. Some voters will have additional races on their ballots depending on where they live. It is also important for voters to note that they may see some different contests than what they have voted in previously because of redistricting and reprecincting.

Early voting is encouraged to avoid the problems that sometimes come on Election Day. Polling locations have already seen problems like a few losing power because of thunderstorms and some experiencing technical glitches with some of the voter registration equipment. Election officials were prepared with generators and tech support for voting not to be delayed too much. 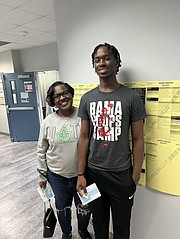 Pam Cormier and her son Joseph

One voter who is not taking any chances with Election Day mishaps and chose to vote early is southwest Houston resident Pam Cormier. She was taught at an early age by her parents about the importance of voting and how so many fought and lost their lives for African Americans to have the right to vote. This is a lesson she is passing onto her sons by bringing them with her to vote. “It was important for me to accompany my sons and especially my first-time voter to the polls for him to see the importance of this human right as a family and to exercise his right to vote that was not an option for Black people prior to the signing of the Voting Rights Act of 1965.” Cormier continued, “I voted with my parents and hope he continues the same tradition with his family. Our votes matter.” 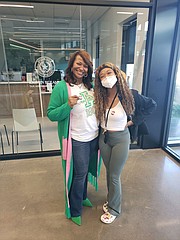 Chandra Thornton is a mother as well who continues to stress the importance of voting to her college-aged daughter. When her first-time voting daughter never received her mail-in ballot, Thornton flew her down from D.C. for her to vote in-person. Her daughter was happy about it because she wanted to make sure she exercised her right. She knows all too well how others before her fought for the right to vote and so she considers it her civic duty to make sure her voice is heard.

“To me the effects of the US snail mail have made the voting by mail process cumbersome for those that are not within the state. You can submit the application via email or fax, but the original application has to be in your county clerk's office within 4 days following the email and fax. They don't care if it is postmarked within the 4 days. They say they are not responsible for the mail if it gets lost or doesn't meet the deadline.”

Thornton said there are too many issues at stake for her daughter not to vote. “It was important to fly my daughter from college to vote in this midterm election. This race is very crucial for the State of Texas. The issues dealing with women's reproductive rights, voter's rights, and gun control are all on the ballot. We need a governor in office that will protect everyone's interest. Our current governor and leaders are so hypocritical. They say gun control would restrict a person's right to bear arms but it's ok to restrict a woman's right to make decisions concerning her own body. Reproductive rights are not about if abortion is right or wrong. It is about a woman's choice to make her own decision effecting her life.”

Some final reminders about early voting. Registered voters may cast their ballot at any polling location during both Early Voting and on Election Day. Election Day is Tuesday, November 8, 2022. Polling locations and wait times are available at HarrisVotes.com. Harris County residents voting by mail need to have their ballots in the mail with two forever stamps on the purple mail carrier envelope and postmarked by 7 p.m. on Election Day, November 8, and it must be delivered to our office by 5 p.m. on November 9. If delivering in-person, voters may only bring their ballot to NRG Arena, Hall D (1 NRG Parkway, Houston, Texas 77054) on November 8. The voter must be present with their ID to turn in their mail ballot. A white tent will be set up outside of NRG Arena, Hall D for the convenience of voters dropping off their mail ballot in-person.

No matter what your reason makes your way to the polls to vote. Put people in office that reflect your interests not just now but for the long term. Many of the decisions of those elected will have long term ramifications.

If you don’t early vote, be sure to vote on Election Day, November 8th from 7am-7pm. For more information, visit HarrisVotes.com.