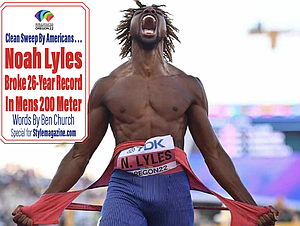 It was a spectacular night of sprint- ing at the World Championships on Thursday as records tumbled in both the men›s and women›s 200m finals.

The Jamaican dominated the race and won in a time of 21.45 seconds -- becoming the second fastest woman of all-time behind only American Florence Griffith-Joyner.

Lyles is now the third fastest man over the distance after clocking in at 19.31 seconds.

“Today is my day. I finally got to do what I dreamed of,” Lyles said after the race. “I felt I got the best start I could possibly ask for.”

He was joined on the podium by two fellow Americans -- Kenny Bednarek in second and teenager Erriyon Knighton in third -- as the US became the first country to complete the clean sweep of World Championship medals in both the men’s 100m and 200m.

“It’s an immaculate feeling to be on the podium with two fellow Americans,” Lyles added.

While not completing the full sweep in the women’s race, Jamaica did complete the 1-2 with Jackson and Fraser-Pryce way ahead of Great Britain’s Dina Asher-Smith in third.

Johnson, who saw his record beaten by Lyles, was working as a pun- dit for the women’s race and said the quality was the “best we’ve ever seen.”

“I’m feeling great. I came out and put on a show,” world champion Jackson said. “The fastest woman alive, the national and championship record, I can’t complain.”