Sixty-five Years Later & We Are Still Fighting to Vote 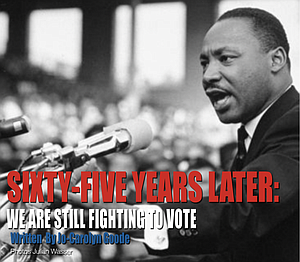 In 1957, Dr. Martin Luther King, Jr. gave an historic speech to advocate for the voting rights of African Americans in the United States. Calling the denial of African Americans’ right to vote a “tragic betrayal of the highest mandates of our democratic tradition,” Dr. King laid out what would happen if African Americans could vote. Below are excerpts from his “Give Us the Ballot” speech.

Give Us the Ballot speech

Give us the ballot, and we will no longer have to worry the federal government about our basic rights.

Give us the ballot, and we will no longer plead to the federal government for passage of an anti-lynching law; we will by the power of our vote write the law on the statute books of the South and bring an end to the dastardly acts of the hooded perpetrators of violence.

Give us the ballot, and we will transform the salient misdeeds of bloodthirsty mobs into the calculated good deeds of orderly citizens.

Give us the ballot, and we will fill our legislative halls with men of goodwill and send to the sacred halls of Congress men who will not sign a “Southern Manifesto” because of their devotion to the manifesto of justice.

Give us the ballot, and we will place judges on the benches of the South who will do justly and love mercy, and we will place at the head of the southern states governors who will, who have felt not only the tang of the human, but the glow of the Divine.

Give us the ballot, and we will quietly and nonviolently, without rancor or bitterness, implement the Supreme Court’s decision of May seventeenth, 1954.

Looking back on Dr. King’s words and the accomplishments of African Americans we have achieved some of what Dr. King spoke about. We have filled the legislative halls with men of goodwill like that of Barack Obama, Elijah Cummings, Al Green, Sylvester Turner, Rodney Ellis, and Garnet Coleman. We have also put in some good women Kamala Harris, Sheila Jackson Lee, Maxine Waters, and Senfronia Thompson. We have representation on the bench Vanessa Gilmore, Nikita Harmon, Erica Hughes, Toni Wallace, Kali Morgan, and Latosha Clayton-McGill.

We have made these while nonviolently marching for justice, freedom, and victory over those things that suppress us.

Some legislators are pulling out all the tricks to make it harder for minorities to vote touting that they are doing it to protect the right to vote when it only suppresses it. Texas Governor Greg Abbott signed the voter suppression bill (SB1) into law late last year and it went into effect on January 1, 2022. The new bill attacking voter rights will be most felt by those in Black and Brown communities. The new voter suppression law reverses a lot of the practices that made voting so accessible and convenient for those in Harris County in 2020. Drive thru voting is banned. Twenty-four-hour polling places are banned. The act of sending an application to vote to someone who doesn’t ask for one by any elected official is not only banned but the accused could face jail time. Voters must show their driver license or know the last four of their social security. Poll watchers now have free range in polling places. All of this is not right and seem like modern day “Jim Crow laws.”

“The Civil Rights Division is committed to protecting the fundamental right to vote for all Americans,” said Assistant Attorney General Kristen Clarke for the Justice Department’s Civil Rights Division in November 2021 at the announcement of the lawsuit filed against Texas to protect voting rights. “Laws that impair eligible citizens’ access to the ballot box have no place in our democracy. Texas Senate Bill 1’s restrictions on voter assistance at the polls and on which absentee ballots cast by eligible voters can be accepted by election officials are unlawful and indefensible.”

According to most Republicans SB1 was needed in Texas to protect the integrity of the vote claiming voter fraud for past elections. They said even after the Texas Attorney General allegedly spent over 22,000 hours searching for evidence of voter fraud and found little to no evidence supporting actual fraud.

Dr. King knew then what is still needed now. He said in the tragic break down of law and order, strong, aggressive leadership is needed. Recall how Texas Democratic legislators joined together as a strong united front to stand up to voter restrictions. For over 30 days, they broke quorum and headed to Washington, DC to try to get some support. Just like Dr. King was often threaten with being thrown in jail and even going to jail on his stance for injustice. Texas lawmakers were threatened with jail time if they didn’t return to session. Sadly, being handcuffed to protect the law is not something that is foreign to them.

In times like these, Dr. King said, “each of us must keep faith in the future. Let us not despair. Let us realize that as we struggle for justice and freedom, we have cosmic companionship.” He continued, “Keep going today. (Yes sir) Keep moving amid every obstacle. Keep moving amid every mountain of opposition.”

On the Martin Luther King, Jr., holiday we at Houston Style hope that you keep the flame of justice burning within you to help stop these tactics to take away our vote. Write to your representatives. File a petition. Go and out and vote in every election. Do your part in the fight. Together we can and will win.

“When that happens, “the morning stars will sing together, and the sons of God will shout for joy,’ said Dr. King.