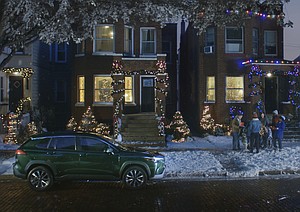 With the holidays upon us, Toyota is celebrating the joy of the season with a special message about spreading kindness. “Like No One’s Watching,” the first of two Toyota holiday ads, debuted last night during NBC’s primetime special, “Christmas in Rockefeller Center,” with a personalized throw from a show host.

“Like No One’s Watching” is a :60 spot that shares the touching story of a young woman, Clara, who takes it upon herself to perform selfless acts of kindness for others throughout the holiday season. In the spot, Clara is shown delivering groceries to her elderly neighbor, leaving a small gift for another young neighbor and helping to catch and return a neighbor’s dog that escaped. The spot shows Clara alone in her city, choosing to help cover her coworker’s shift for the holidays. In the final scene, Clara arrives home on Christmas Eve where she is surprised by a group of neighbors who are returning the favor with a Christmas tree and gifts. “Like No One’s Watching” was created by Saatchi & Saatchi and directed by Oscar Nominated director Ted Melfi.

Toyota’s Hispanic creative conveys a magical message of togetherness that’s sure to touch viewers hearts. The bilingual :60 spot titled, “The Search,” shares a heartwarming Christmas story of a young protagonist, Sophia, and her grandfather driving in their Sequoia on a journey to find Santa’s house. While the mission may prove daunting, the two share a special moment together on their adventure. The bilingual spot was created by Conill Advertising and directed by award-winning director Peter Thwaites.

“Toyota’s holiday message focuses on simple acts of kindness and encourages people to connect with their communities this holiday season,” said Lisa Materazzo, group vice president, Toyota Marketing, Toyota Motor North America. “We hope this heartwarming message will inspire viewers to spread kindness, during the holidays and beyond.”

In the spirit of celebrating those that serve others, Toyota is giving back to our community heroes: teachers. Toyota is partnering with National Center for Families Learning (NCFL) and Kids In Need Foundation (KINF) to provide teacher supply boxes that include essential supplies to fuel a semester of learning, including notebooks, pencils, folders, markers and more. All teachers at five under-resourced school districts across the country will be outfitted with supplies, impacting more than 15,000 students. Often, teachers receive a limited number of supplies for their students at the beginning of the school year, which is quickly depleted as the semester progresses.

Following the spot premiere during NBC’s “Christmas in Rockefeller Center” special, the :60 version of “Like No One’s Watching” will also air with high-profile airings including NBC’s “TODAY” on Thursday, 12/1 and Sunday Night Football on NBC on Sunday, 12/4.

After the premiere week, “Like No One’s Watching” will begin airing :30 and :60 versions across broadcast and cable networks on 12/10. The integrated campaign will appear nationally on broadcast, cinema and OOH. The spot will air during prime time, early morning, sports programming and on cable networks such as TBS, Discovery and Weather Channel, NBA games on ESPN, NBC Sunday Night Football halftimes throughout December, as well as holiday programming on Freeform and Hallmark Channel.

Hispanic linear TV coverage of “The Search” includes a mix of broadcast networks and targeted cable, including Univision, UniMas, Telemundo, Universo and Discovery en Español. High profile Hispanic media programming will amplify “The Search,” including – Univision’s annual TeletonUSA on 12/17, Sunday Night Football on Universo, as well as a holiday special on En Casa con Telemundo on 12/16 that includes a throw from a show host to the :60 spot. The :60 version of “The Search” will appear in theaters 12/16-12/29. Digital video includes partners such as Peacock’s Tplus and ViX. Toyota will be the presenting sponsor of People en Español’s ultimate guide for celebrating the holidays with loved ones, which includes editorial, digital and social amplification.