Notorious RBG: Protector of the Right to Be Treated Equally 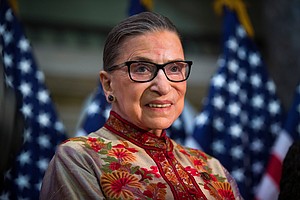 Hours after learning of the death of Supreme Court Justice Ruth Bader Ginsburg President Donald Trump said, “She led an amazing life. What else can you say?" There is a lot more that can be said because of the long-standing legacy she forged as a warrior for justice. While Joe Biden said the nation should be focusing on “the loss of the justice and her enduring legacy," our Commander in Chief’s, who is clearly unable to empathize with anyone, thoughts were laser focused on Ginsburg replacement rather their her life and legacy.

Long before former President Bill Clinton appointed Ginsburg to the high court in 1993 she had made a name for herself. She is most famously known for her advocacy for gender issues under the 14th amendment. When the amendment was enacted women had no rights and weren’t even thought of as people but as the property of their husband. Several women before Ginsburg had argued against the 14th amendment to gain some rights for women including Myra Bradwell, Susan B. Anthony, Virginia Minor, and other activists. They took their cases before the Supreme Court under the “privileges and immunities” clause of the amendment due to the broad wording that left it wide open on the interpretation of its meaning. All of those women failed in their pursuit of justice that is until Ginsburg came along with a different approach.

Inspired by the work and book, “States’ Laws on Race and Color,” by African American lawyer and activist Anna Pauline “Pauli” Murray and Dorothy Kenyon, Ginsburg argued that men and women were indeed equal under the 14th amendment thereby making discrimination of women illegal under the eyes of the law. The Justices of the court were memorized by her argument and she won her case. Her continued work in gender-based equality greatly contributed to the reason women have so many rights today as her court victories changed legislation worldwide. She had already become a legend before she even stepped foot on the bench of any court.

"I had the good fortune to be alive and a lawyer in the late 1960s when, for the first time in the history of the United States, it became possible to urge before courts, successfully, that society would benefit enormously if women were regarded as persons equal in stature to men,'" she said in a commencement speech in 2002.

However, that would not be the only incident in which Ginsburg would create a mark. She did so again and again as the founder and general counsel of the American Civil Liberties Union’s Women’s Rights Project. Through the organization, countless women were given opportunities once denied to them.

As a Supreme Court Justice, Ginsburg brought the same examining eye seeking out what was fair and just in each case that was presented to the court. Her progressive, liberal thinking showed in her votes to change legislation on the issues of abortion, LGBT rights, immigration, voting, and affirmative action. She was not shy about sharing her opinion on such topics.

Many thought her work mirrored that of a previous Justice with her same vision to give all people equal treatment under the law. Ginsburg was compared to Thurgood Marshall frequently, to which she would deny the comparison saying she was given far too much credit. Noting that Marshall’s life was always threatened due to his work and she never faced such danger in the legal profession.

On the bench, Ginsburg is most acclaimed for her vote and words in the court case of the United States v. Virginia, where an institutional policy of Virginia Military Institute to ban women’s admission was cited as being unconstitutional.

Ginsburg’s legacy would continuality carve out a mark in human history while on the court for 27 years gaining as much notoriety as her law cases. She became widely known by the nickname Notorious RBG, named after famed rapper Biggie Smalls. Memorabilia would be created bearing her likeliness and such items capturing her more as a Hollywood A-lister instead of a legal genius.

Sadly, her later years would be painful with numerous bouts with cancer. Despite being a strong fighter, she would lose her battle on Friday, September 18, 2020. Not even a week after her death from cancer Ginsburg was not remembered for all the life changing work she did by Republicans. All they could see is that they now had an opportunity to swing the way the Supreme Court would ruled by adding a conservative thinking new Justice. It is quite interesting when the same opportunity was before Democrats with then President Barack Obama placed with the opportunity to name a new Justice after the death of Judge Antonin Scalia. Republicans were quick to say that the next president, not Obama, should be given the authority to pick the next Justice since the end of Obama’s term was some eight months away from the election. However, Republicans have moved even quicker and are now flipping their tone when the opportunity is in Donald Trump’s hands when he is less than 6 weeks away from the election citing that because both the White House and Senate are under Republican control the circumstances are different. Funny how Republicans can interpret the law to go in their favor every time and they are deemed right (by themselves) and the same law they can flipped and interpreted in the exact opposite manner and still be right. It is really funny how politics works.

Trump already has a nominee in mind and Republicans are ready to vote to push his nominee through for approval. Ginsburg has not even been deceased a week yet and all of this is already in place.

This is probably the response Justice Ginsburg feared and why she tried to hang on as long as she could. Her granddaughter Clara Spera shared a statement from Ginsburg shortly before her death, "My most fervent wish is that I will not be replaced until a new president is installed.”

It seems that wish has fallen on deaf ears. Republicans couldn’t even agree to pass a resolution honoring Ginsburg brought up by Senate Minority Leader Chuck Schumer due to certain language about her replacement being filled by the next president. Final death wish or not the Republicans are moving with their agenda.

"She led an extraordinary life. She was one of the finest Supreme Court litigators to have ever practiced," said Texas Senator Ted Cruz, continuing, "Justice Ginsburg understood full well that the position being put forth by the Democratic leader is not the law and is not the Constitution."

The fate of Ginsburg’s legacy is now in jeopardy if Trump’s Supreme Court Justice is approved. It is no doubt that Trump and the Republicans will try to undo the work of Ginsburg just like it was done with the work of the Obama administration. Trump will announce his nominee on Saturday after the arrangements for Ginsburg in respect to her. However, his advisors are pushing him to name the nominee sooner. He likely will name conservative and federal appeals court Judge Amy Coney Barrett.

As Ginsburg made her final trip to the Supreme Court, Trump paid his respects, something that he did not do for Rep. John Lewis and wasn’t allowed to do for Sen. John McCain. It is said that Trump is mindful that the Democrats will use any disrespect he shows towards Ginsburg’s death as ammunition against his Supreme Court pick so Trump is trying to be presidential in regards to Ginsburg’s passing.

A private ceremony was held for Justice Ginsburg followed by a public viewing where 120 of her former clerk stood guard.

Justice Ginsburg lived a remarkable life of purpose and destiny. Many thanks to her for all that she did to advance women’s rights but also for the rights of others. Neither she nor her work will ever be forgotten. Rest in power Justice Ruth Bader Ginsburg.

Houston Style Magazine extends expressions of sympathy to the family and friends of Justice Ginsburg.