Latinos Power Up to Vote 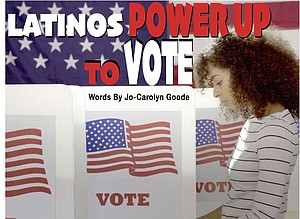 The U.S. Census Bureau predicts that in the next six months Latinos will no longer be the minority but the majority. A static that excites the members of Jolt, the largest Latino progressive organization in Texas, since with greater numbers comes greater power. However, legislators are not utilizing Latinos' political power. Latinos across the country are expected to support different agendas, show up at the ballot box, and check this and that box but no one is really listening to what they want. No one is taking the time to invest in the community but expects the community to invest in them. Antonio Arellano, Interim Executive Director of Jolt, thinks it is time out for that. If any political party wants to capture Latinos they must first invite them to the party.

Historically, Latinos have had low voter turnout and why should they when no one is actively engaging them. An ad in Spanish here and a translated website there does not make for a convincing argument that one cares about the plight of the people. Arellano suggests to grab the ear of Latinos legislators need to start tackling the issues that mean something to them like healthcare for all, immigration reform, and racial equity. In the era of Black Lives Matter and the senseless killing of Black people, Latinos have come to realize that the Black fight is their fight as well.

“The police brutality in murders of folks like George Floyd and Breonna Taylor has made sure that Latinos recognize that this fight is not just a fight that should be fought by Black leaders of our country. We are in this fight as well. “ Arellano continued, “We recognize that we are oppressed by the same oppressor. And it is important that in this moment in history that we stand side-by-side with our Black brothers and sisters and push back against discrimination and racism.”

Political leaders must not do a whitewash of the issues and expect Latinos to get on board. Take the time to invest in them. Arellano pointed out that in this current election cycle not one major political party has reached out to the Latino community. While they are not asking any special treatment, the people simply just want the opportunity to be heard like everyone else.

“What we are asking for is equality, equity, a fair playing field for everyone,” Arellano said as key to getting Latinos to register to vote and show up at the polls come November.

Far too long black and brown communities have cried out in pain about the blatant injustices of this nation to deaf ears. It is time out for that kind of behavior. Young political mavens are galvanizing across the country, no longer asking for justice to be served but demanding it. Movements are in place in every corner of this nation where the youth are the ones picking up the mantle for justice where past civic leaders have grown weary and tired.

“Freedom is not given or guaranteed,” commented Arellano. “ In this moment in time, we are seeing a new generation of young people of color rise up to descend and demand their liberty and their equality like never before. And it is imperative that we recognize that in Texas we must modernize civic engagement to allow this digital generation to participate in our democracy.”

Expounding on this reality, Arellano pointed out how Texas is the only state that is still behind the ball when it comes to registering to vote online. This obstacle negatively disenfranchises a major portion of the population in this digital age. Online registration would just be one more way to making voting accessible to all this eliminating one of the many barriers to voting. If Texas truly wants to be a leader in democracy with representatives in government that look like those in the state a lot more needs to be done to make voting easy, accessible, reliable, and safe.

With more access comes more representation. Jolt is leading the fight for more Latino representation by building a pipeline of leaders to have positions on every level of government. One must first have seat at the table before anyone can hear their voice. Establishing and growing this type of foundation gives Arellano hope that in the next ten years the United States will have its first Latino president.

The building must first start in metropolitan cities like Houston. Known as one of the nation’s most diverse cities, Houston is a melting pot of cultures meshing together as one. Nationalities of every ethnicity are represented here in large numbers reflecting what all of America looks like. Thereby, Houston could be a huge political giant in the scope of how the country turns.

Arellano suggests starting at the local level and working up the chain. For example, Latinos make up a big portion of Houston’s population but one would never know that looking at the ethnic makeup of Houston City Council, as there is only one Latino city council member. Arellano argues that must change.

Don’t be part of the problem. Be part of the solution. Grab your VIP ticket for change when you register to vote and follow that up by voting early or on Election Day via in-person, mail-in ballot, or absentee. Find out everything you need to know about voting at HarrisVotes.Gov.