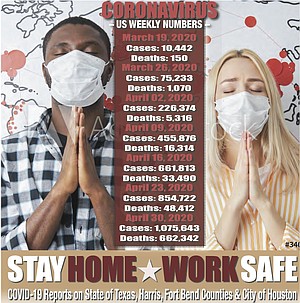 “We are still in the thick of it,” said Harris County Judge Lina Hidalgo at a press conference where she gave updates about the state of the county during the COVID-19 pandemic. Although the curve seems to be flattening, Houston has yet to reach its peak and new admissions of patients with the coronavirus are still occurring. This information coupled with research from the Center for Disease Control (CDC) and others is of great concern for Judge Hidalgo and other leaders to the point that they can’t comfortably relax any precautionary measures that they have already taken. Saving lives is always at the forefront of Judge Hidalgo’s mind in every decision made in this crisis and why she issued a mandatory mask order on April 22nd.

Calling the mandate something “we have to do for the sake of our safety, our lives and our economy,” Judge Hidalgo issued the face covering order to begin April 27th and end May 26th. The mandate required anyone over the age of 10 to cover their mouth and nose with some type of face covering including masks, scarves, bandannas, handkerchiefs, or t-shirts when out in public. Evidence has shown this practice with social distance has been the most effective line of defense with battling the spread of the coronavirus.

Anyone found not obeying the order would be issued a fine of $1,000. Many exceptions to the mandate included exemptions to those with health and/or mental conditions where a mask could hinder healthcare, as well as when one is at home or doing activities as driving or exercising alone and eating.

No sooner had the words left Judge Hidalgo’s mouth came the backlash from the state governor’s office on down. Governor Greg Abbott said no local government could issue such a mandate with a fine even though he recommended Texans to wear masks. Lieutenant Governor Dan Patrick said Judge Hidalgo was abusing her authority and understood why some were angry. Other leaders called the action a government tyranny. A local doctor took it a step further by formally suing the county judge to block the order citing that it was a violation of citizens’ constitutional rights. Harris County Sheriff Ed Gonzales, Houston Mayor Sylvester Turner, and Houston Police Chief Art Acevedo said they would not order officers to issue fines for noncompliance but instead would give residents a mask as the goal with all precautions is to keep people healthy, safe, and educated.

Following the governor’s comments, Judge Hidalgo said the implementation of the fine was to let the public know the seriousness of wearing a mask. The fine was not the intent of the order. She also issued the following statement:

"Harris County is the epicenter for the COVID-19 crisis in Texas and face coverings are one of the only weapons we have to stop the spread of the virus and reopen safely. We have a face covering order today and we'll still have a face covering order tomorrow. In practical terms, the governor's order doesn't change much because, like every order we've issued so far, we'd made it clear that the priority was education. The fine was there as a signal of how vital mask wearing is, and in many ways, the community got that message. It's been disappointing to see folks politicize public health, and I hope this means they'll go back to focusing on health and safety instead of politics. As we have in the past, we will amend this order to conform with the governor's."