"We Are Power: How Nonviolent Activism Changes the World" by Todd Hasak-Lowy 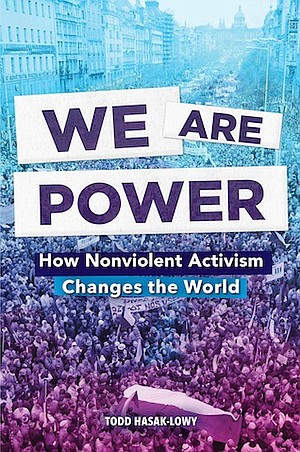 You put a lot of work into your sign.

When you were done, what was once the side of a cardboard box suddenly became a note to the world – but as you were making it, you have to admit that you wondered if one cardboard sign was going to make much of a difference. You were protesting, but who would notice?

Read "We Are Power" by Todd Hasak-Lowy, and wonder no more.

There you were, sitting in History class last year, thinking that there were So. Many. Wars. Right, but get this: history is much more than that. Hasak-Lowy says that history is also about "conflicts of a different sort...."

Take, for instance, the movement for suffrage: women in the early part of the last century had zero rights. Zero, but they wanted to be able to vote more than anything. It took women like Alice Paul years before protests and marches gained them (and us!) that right but the entire time, they stayed the course. Yes, it meant sacrifices, both physical and mental, but Paul and her sisters stuck with the plan.

Mohandas Gandhi used the word "satyagraha" to describe intentional, firm, truthful, and forceful nonviolent action or resistance. Gandhi embraced satyagraha when he peacefully organized 300 million Indians against British rule, knowing that there was strength in numbers.

Though he was a twenty-seven-year-old "inexperienced pastor" who'd been tapped to lead a boycott he'd barely had opportunity to grasp, Martin Luther King realized that nonviolent resistance was dangerous, but worth it. It was courageous, not cowardly.

And just a few years ago, a small braid-wearing teenager stepped to a microphone to address world leaders about climate change and the urgency for doing something solid about it. By her courage, Greta Thunberg became a satyagrahi, and brought nonviolent activism to the forefront of the 21st century.

Here's the first thing you should know about "We Are Power": it's not a planner for anarchy and it's not a how-to book; if anything, it's a how-not-to book.

Indeed, through stories and a few period photographs, author Todd Hasak-Lowy shows young readers something important about making change: that when an individual becomes part of a well-thought-out, peaceful collective, things can happen without warfare. There's a reason, in other words, that it's called "NONviolent activism."

For the teen who's a bit on the pessimistic side, or is eagerly ambivalent about involvement, that can be inspirational, even exciting – and yet, Hasak-Lowy doesn't get cuddly about the realities: activism is hard work and sometimes literal pain, and it might take years to see the fruits of one's labor. History shows that activists like those in this book have braved danger, but it also shows that steady, insistent confrontation works.

For the 10-to-14-year-old who's been riveted by recent news or activities in their hometowns, this book will inspire and inform, and it will help them find parallels between yesterday and today. They'll want "We Are Power" for its truth and its comprehensiveness, so find it. For the future of all, that's a good sign.