From Corvette To COVID-19 Response: How 3D Printing Transforms Technology for General Motors

Additive manufacturing allowed GM to pivot from making vehicles to COVID-19 medical devices and supplies in days, not months 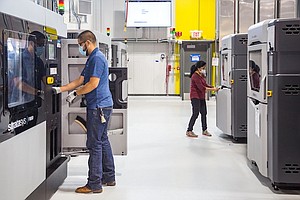 General Motors typically relies on 3D printing to help launch new vehicles, such as the first-ever mid-engine Chevrolet Corvette. During the COVID-19 outbreak, the same technology played a critical role in helping the team transition from making vehicles to medical devices in a matter of days.

“3D printing helps us design and build parts and products faster and in ways we previously couldn’t,” said Kevin Quinn, GM director of additive design and manufacturing. “It’s already having a positive impact on how we develop and build vehicles, like Corvette, and it’s allowed us to apply our mass production expertise to medical supplies and devices.”

The first time a physical version of the mid-engine Corvette came together, 75 percent of the parts were 3D printed. No other GM "slow build" design and engineering evaluation has featured this amount or level of detail in terms of its 3D-printed components. This allowed the team to envision what a production vehicle would look like and how all the parts would fit together. They were also able to diagnose and correct issues early on, reducing development time.

3D printing was also used extensively to test and implement Corvette-first features like right-hand drive for international markets and the retractable hardtop.

GM’s expertise in additive manufacturing in turn enabled the company to quickly shift from its core automotive business to medical production.

“We could not have responded to the coronavirus as quickly as we did without 3D printing,” said Ron Daul, GM director of additive manufacturing. “The investment in both our additive manufacturing facilities and training the team to leverage 3D printing for development has enabled us to pivot to making ventilators and personal protective equipment virtually overnight.”

Nearly all tools used to assemble the ventilators that GM is manufacturing with its partner Ventec Life Systems and collaborator Hamilton Medical are 3D printed.

Most are 3D-printed “nests” or fixtures that hold parts in place during assembly at GM’s facility in Kokomo, Indiana as well as Hamilton Medical’s plant in Reno, Nevada. These nests are reverse engineered from part data received from Ventec in Seattle and Hamilton in Switzerland.

“3D printing allows us to make constant, rapid changes to fixtures based on feedback from the assembly teams,” said Dominick Lentine, GM senior manufacturing engineer, additive applications. “We can receive feedback from Hamilton, improve a part and have it flown back to Reno in less than 24 hours.”

To increase the speed of response even further, teams from GM’s Additive Innovation Lab and Additive Industrialization Center, both in Warren, Michigan, recently delivered and installed 3D printers from their respective facilities to the Kokomo plant to print new hand tools onsite.

GM has been using additive manufacturing for rapid prototyping since 1989. The role 3D printing played in the development of the mid-engine Corvette will only accelerate with each new model the company introduces.

This institutional knowledge of 3D printing allowed GM to quickly build and assess different designs of assembly tools mentioned above. It also helped the company develop and produce face shields for first responders.

Seeing a dire need for face shields at local hospitals, GM’s additive manufacturing team started with an open-source design that originated with desktop 3D-printer manufacturer Prusa Research. The team quickly delivered prototypes to local healthcare workers and from there, made three crucial improvements based on healthcare workers’ feedback before producing face shields in large quantities.

GM then 3D printed parts for more than 17,000 high-quality, comfortable, latex-free face shields. In many cases, the teams printing the face shield components were also delivering these shields to local hospitals.

Simultaneously, the team sent the final design to be mass-produced using injection molding. Since the final design went into full production, GM has produced more than 250,000 face shields.

More recently, GM has been 3D printing ear savers that may make protective masks more comfortable for certain wearers. As with face shield production, additive manufacturing helped GM’s team develop, refine and distribute a design before industrializing production of the ear savers on a wider scale.

GM’s extensive use of 3D printing for medical equipment was enabled by recent investments in additive manufacturing, including two all-new facilities in Warren.

The Additive Innovation Lab, which opened last year, is a 4,000-square-foot facility in the heart of the Cole Engineering Center, inside GM’s Global Technical Center in Warren. Easily accessible to tens of thousands of employees, GM’s engineers, designers and other team members can learn how to operate the 3D printers and software, convert files into physical parts and then process these parts. To date, more than 700 employees have been trained by the facility’s combined salaried and hourly workforce.

“Most design work takes place in computer-aided design or computer-aided engineering these days, but there’s no substitute for having an actual part in hand to prove out your concept, be it a transmission component or a face shield visor,” said Quinn.

As seen in the production of medical devices and personal protective equipment, 3D printing provides benefits such as:

-Testing the fit or function of parts ahead of production

-Saving on tooling costs, which can be prohibitively expensive, as some actual production molds and dies can be 3D printed

-Checking the tactile feel of different materials and forms

A second greenfield facility, the Additive Industrialization Center, will begin official operations in late 2020 onsite at GM’s Global Technical Center. The stand-alone facility will further expand GM’s expertise and capability in 3D printing and additive manufacturing. More details about the facility will be released later this year.

General Motors (NYSE:GM) is a global company committed to delivering safer, better and more sustainable ways for people to get around. General Motors, its subsidiaries and its joint venture entities sell vehicles under the Chevrolet, Buick, GMC, Cadillac, Holden, Baojun and Wuling brands. More information on the company and its subsidiaries, including OnStar, a global leader in vehicle safety and security services, can be found at http://www.gm.com.