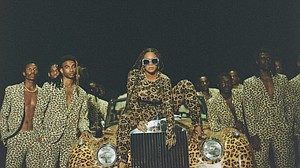 In March 2018, a month after the film "Black Panther" was released, the fictional country Wakanda was the fourth most-mentioned African country on Twitter -- after Egypt, South Africa and Kenya -- according to a 2019 study by the University of Southern California. The fact that Africa's fourth most-talked about country doesn't exist confirms just how powerful pop culture is in shaping our understanding of the world around us.

So when Beyoncé Knowles-Carter -- one of the most influential living artists on the planet -- released a teaser trailer for her new visual album "Black is King" in late June, featuring (as she described in an Instagram post about the project) "Black history and African tradition," some Africans didn't like it.

With its imagery of face and body paintings, feathers and animal fur, in celebrating our African traditions "Black is King," perhaps a little naively, missed the pulse of how many young, urban Africans -- both on the continent and the diaspora -- want to see themselves. They want to be presented in a more contemporary way, as global citizens representing a dynamic continent. Beyoncé picked the right story -- but may have given it the wrong framing.

In the film, she pays homage to what she called on Instagram "the breadth and beauty of black ancestry" and she is right that this is very much intertwined with the story, the history and the culture of this continent. And the trailer is certainly breathtaking, with exquisite cinematography, a haunting soundtrack, lavish visuals and beautifully laid-out sets - nothing less than we have come to expect from Queen Bey.

In mid-July, an additional trailer was released, but it did not quell the response to Beyonce's use of imagery or authority to try to tell Africa's story.

But why, some might reasonably ask, do chalk markings on black faces, naked male torsos and a preponderance of animal pelts provoke uncomfortable reactions from some Africans, when that is very much a part of our history and in some cases our existing cultures?

Answering that question has its innate challenges, especially if the short trailers simply omitted some context for the imagery that we'll get with the full album, but here I go...

The trap that Beyoncé's trailers fell into is the stereotypical (albeit visually compelling) story of a primitive continent that hasn't advanced much, which frustratingly still dominates too many Western perceptions. While the "Black is King" trailer captures the less harmful, more romantic aspects of the story, the other side of that same coin is the more harmful Afro-pessimistic view, which is prevalent in popular culture and media coverage. This view tends towards the "poverty is rife, violence is prevalent and disease is endemic" vision of Africa.

Although a global icon, Beyoncé's primary audience is in America, which according to a 2019 study on Africa in the US media conducted by the University of Southern California, is a country that knows, hears and sees very little about Africa. Perhaps this is why Beyoncé's efforts should be viewed as an opportunity to inform, educate and shape how this audience in particular sees the continent.