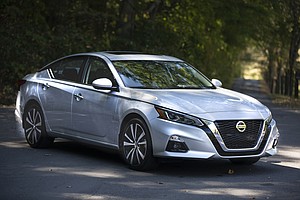 DETROIT – Impressive. That’s the first descriptive word we thought of when it came to the 2020 Altima 2.0 Platinum Sedan.

The car was outstanding but we’re talking about the transmission. Nissan has probably done more work on continuous variable transmissions than any other automaker and it showed on this day trip from here to Battle Creek, MI.

We discovered some traits in the Altima that you can only find in a real-life test drive, like the CVT. It was quiet, it simulated shifts and it was just as effective as a regular transmission.

Acceleration was good. The 2.0-liter turbocharged four-cylinder engine made 236 horsepower and 237 pound-feet of torque. The Altima was front-wheel drive with good road manners.

The car had an EPA rating of 25 mpg in the city, 34 mpg on the highway and 29 mpg combined. Those numbers are due to the CVT. That’s their advantage; they are easier to produce than regular transmissions and they get better mileage.

The Altima was a comfortable midsize sedan. It had analogue instruments with a sizable TFT screen between the speedometer and the odometer. We really liked the compass which displayed as an arc at the top of this screen.

The turbo gave us almost instant acceleration. The Altima was quick, it maneuvered well, and it was comfortable. The heated steering wheel felt good in our hands. That makes a difference in the driving experience.

The car had a floating touch infotainment screen. The climate controls were beneath it. That panel also housed the controls for the heated seats and the heated steering wheel.

There was a USB jack beneath it in a cubby like area, the auxiliary jack was there as well as was a 12V plug. What we’ve not seen before is there was also a USB jack for an android phone or recharging charging battery. We could have plugged our Wi-Fi hotspot into it.

We got in the back seat and found plenty of head space as well as hip room. There were two USB jacks there. The tunnel was not that pronounced. Three people could have sat abreast but whoever was on the hump would not be comfortable but sitting three across was doable.

The 2020 Altima was sporty, but it was not a sports car. We were on back roads. They were well constructed with lots of curves, shrubs, and trees. It was a rare instance that we could even see the sky clearly and that was okay. It was a very scenic drive to the Gilmore Car Museum.

What we learned about the Altima was that it couldn’t be powered through these curving roads like Kent Lake, Silver Lake, Pickney and Dexter. Five miles over the speed limit, maybe 10 was doable. Any more than that and you could end up in serious trouble.

The only thing we found unpleasant about the car was that the CHMSL housing obstructed the view out the back window using the rearview mirror. For those who may have forgotten, the CHMSL are the stoplights mounted in the rear roof line or the back window of the car. It stands for Center High Mounted Stop Lamp. Anyway, from inside the Altima that housing can be obstructive.