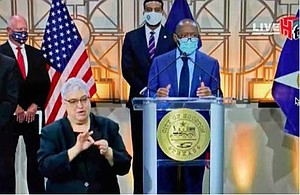 “The GLO is playing politics with cit- izens who need their Harvey damaged homes repaired,” Mayor Sylvester Turner said. “I am disappointed the state agency is engaged in an illegal attempt to take control of the funds, without any regard to those who nee help."

The City of Houston strongly opposes the GLO’s proposal to eliminate all City-administered CDBG-DR 17 program funding for several reasons.

First, the City’s programs are successful and on schedule. For example, even though the City is only 1.5 years into its six (6) year grant:

-$446 million (35%) of total funds allocated to the City has already been designated for the specific properties or projects at which the assistance is to be used.

-$153 million (12%) is already under a signed contract that obligates its use to deliver recovery services, with more contracts being signed on a weekly basis.

The City's Single-Family programs have already fully served 234 homeowners, with another 246 families submitted to or approved by GLO and currently being served. At the current pace, the City will serve 1000 families for each of the next 4 years before the end of the contract, for an estimated total served of 4, 480 families.

-Second, the City's programs are better and more appropriate for the citizens of the City than those the GLO has implemented

-Third, the GLO's proposed amendment violates the terms of its subrecipient agreement

Section2.03 of the Contract provides that amedments to increase or decrease the amount of the subaward must be made by written adgreement of the parties and the City has not consented to any reduction in its subaward.

-Finally, the GLO has demonstrated that it has a difficult time complying with HUD requirements and with establishing and communicating its own bureaucratic and confusing requirements to the City.