Jesse Jackson: College Athletes Should Decide Whether to Take the Risk 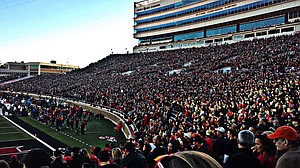 The NCAA has just ruled that mandatory football practices can begin in July, anticipating a full season of college football. This is nuts. The pandemic isn't going away; it's surging in more than 29 states, with seven reporting new records for cases in a day. States that opened early without adequate safeguards - Texas, Florida, Arizona - now face a spread of the pandemic that may soon exhaust the supply of hospital beds. Deaths are now over 125,000. Increasing numbers of young people are contracting the disease, presumably because of the lack of social distancing, the scorn for masks that has accompanied the reopening in many states - and, of course, in the White House itself.

The experience of Texas and Florida and Arizona in reopening suggests that it may not even be safe to reopen college campuses with thousands of students gathering together in dorms, classes, parties and bars, much less begin practices on a football field.

In the so-called "voluntary workouts" that some schools began in June, dozens of players have already tested positive. UNLV suspending on-campus workouts when four athletes tested positive for the virus. Texas Tech reports 23 players have tested positive; Clemson reports 37 football players and 47 cases in all among athletes. And now the NCAA says it's time to open mandatory workouts.

Football is a physical contact sport. The coronavirus is transmittable through respiratory droplets. If an infected athlete wipes his nose or mouth between plays, or takes out his mouth guard, he has the virus on his hands that will be in repeated contact with other players. Does anyone doubt that the virus will spread like wildfire once mandatory camps and contact drills begin?

To discount this reality, we hear a lot of gibberish. The athletes will be tested regularly, we're told, and isolated, traced and quarantined if they have the disease. How regularly? Well, daily would be optimal - that is what wealthy professional teams are talking about doing - but few if any universities can afford that. So some will test weekly; some only if an athlete exhibits symptoms, even though young people are often asymptomatic. No wonder Ohio State University is forcing players and their parents to sign an "acknowledgment of risk waiver."

The university is prepared to risk the lives of the players, but not open itself up to liability.

Don't worry, we're told, "college athletes in general are a young, healthy population in relation to the general public. They are usually well-equipped to fight off the infection physically unscathed." Usually. But we're learning that even those who survive the virus are often scarred with weak lungs, or bad hearts.

The watchword, we're told, is "flexibility." Second- and third-string players have to be ready to step in at any time. "This scenario," one doctor wrote, would be analogous to spraining an ankle or pulling a hamstring during warmups and suddenly needing to sit out the next one to three games."