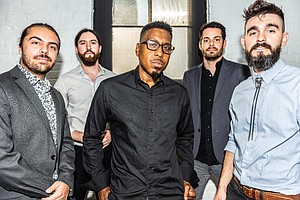 Austin-based soul band Tomar and the FCs are thrilled to announce the details of their “Rise Above” official album release show, taking place Saturday, Feb. 1 at Antone’s Nightclub, located at 305 E. Fifth St, Austin, Texas 78701. The release show, presented by KUTX, will open with a tribute to Stax Records featuring performances by Kevin Russell (Shinyribs), The Watters, Sheree Smith, Soul Man Sam and Courtney Santana. Doors are at 9 p.m. The Stax Records Tribute will take place 10 - 11:15 p.m. and Tomar and the FCs will play from 11:30 p.m. - 1 a.m. Tickets are $15 and can be purchased in advance here.

The band recently premiered the title track from the album with Impose Magazine. They also premiered a video for the track “Innocence” with The Austin Chronicle, which can be seen here.

Speaking about the title track, Tomar and the FCs say, “Rise Above is a call to transcend the current divisiveness in our country around politics, race and so much more. Hopefully it can provide a few minutes of unity during these turbulent times.”

Hailing from the Live Music Capital of the World, Tomar and the FCs is a soul band comprised of Tomar Williams on lead vocals, Andy Tenberg on guitar, Eric Baker on keys, Mitch Fischels on bass and Paul Kresowik on drums. “Rise Above” is a quintessential soul album that explores the concept of time and the evolution of relationships over time. For more information on Tomar and the FCs, please see here.

“We have been working on this album for a little over two years and are beyond excited to share it with the world,” said Tomar and the FCs.

Tomar and the FCs first exploded onto the Austin music scene in 2015 with the release of their EP, “Day by Day,” and by the time they released their debut album “Heart Attack” in late 2016, they had already received critical acclaim and had become a local powerhouse. In 2018, Tomar and the FCs signed to Houston-based, independent record label Splice Records. Now with the upcoming release of their new record, “Rise Above,” the band is delving further into their roots, creating a soul album with elements of blues, rock and funk all influenced by the diverse musical landscape of Austin.

The instrumental tracking for “Rise Above” was done by David Earl at the Dywer House, with addtional tracking, overdubs, and mixing done by Sam Patlove at Bud's Recording Services and with two vocal tracks recorded at Carnival Beats Soul Studios with Salih and Ishaq Williams.

“From the first time I saw the band live to the last time I have seen them live they just keep getting better and better,” said Splice Records CEO Shaun Brennan. “Their shows are more of a spiritual uplifting than a concert, and with ‘Rise Above’ we were lucky enough to capture and record that raw emotion on the album. ‘Innocence’ is the first released single and it will be the first step toward letting fans feel their new music.”