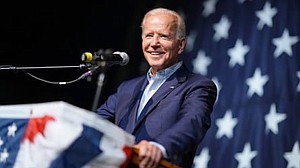 Former Vice President Joe Biden tasted his toes again after he flubbed an answer to a debate question about slavery.

Davis asked Biden how the nation should address its sins.

“You said that some 40 years ago, but as you stand here tonight, what responsibility do you think that Americans need to take to repair the legacy of slavery in our country?” she questioned.

Biden’s answer wasn’t much better than the comment he made in the 70s. He rambled about his record on fighting segregation and suggested preschool-aged children should be in school instead of daycare. The end of his answer was the eyebrow-raiser.

“We bring social workers into homes of parents to help them deal with how to raise their children. It’s not that they don’t want to help, they don’t want — they don’t know quite what to do,” Biden stated.

“Play the radio, make sure the television — excuse me, make sure you have the record player on at night, the phone — make sure that kids hear words,” he added. “A kid coming from a very poor school — a very poor background — will hear 4 million words fewer spoken by the time they get there.”

CNN commentator Angela Rye said the 76-year-old “has not yet dealt with whether or not he has a Black agenda.”

“When we talk about racism in this country, it is not about parents not knowing how to raise their children,” she told anchor Jake Tapper. “And then for him to say that, on the stage at Texas Southern University, which is a historically Black college which — shameless plug, I did the commencement speech this spring — I am just — I just don’t know if he’s not listening to his Black advisers because he has them.”

Rye urged Biden to get with the times and stop relying on his resume to get by.

“And I want him to really come to terms with the fact that things are different from when he started in politics — he’s been in politics a long time — even different from when he served as vice president for both terms for Barack Obama, it is a different day and age and it is required — it is incumbent upon him to have a black agenda and the reason why 52% of the respondents to the black census by the Black Futures Lab say they don’t think politicians care about black people,” she added.

Social media also had a lot to say about Biden.

Biden’s foot-in-mouth syndrome has reared its ugly head a few times since he began his campaign.

In August, he caught flak for claiming “poor kids are just as bright and just as talented as white kids.” A couple of months before, he bragged about his friendly relationship with segregationist politicians.

Then there's Corn Pop, the gangster he allegedly confronted back in the day, according to Insider.