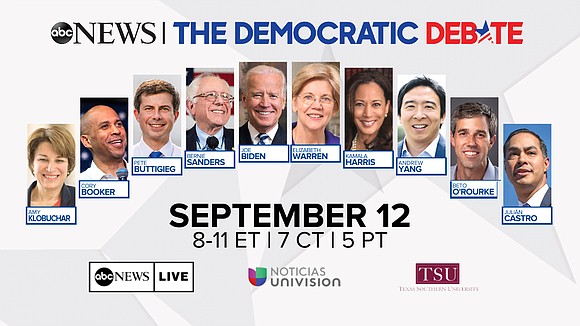 ABC News announced the Democratic Debate will air on Thursday, September 12 from 8:00 to 11:00 p.m. ET on the ABC Television Network and Univision. ABC News is partnering with Univisionon the debate sanctioned by the Democratic National Committee at Texas Southern University’s Health & PE Center in Houston.

The following 10 candidates have qualified to participate in the debate. The podium order will be announced today at 3:30 p.m. ET during “The Briefing Room” on ABC News Live. The debate format will be one minute and 15 seconds for direct responses to questions and 45 seconds for responses and rebuttals. Candidates will have the opportunity to deliver opening statements, but there will be no closing statements.

In the lead up to the debates, “Nightline” will feature candidate profiles and travel across the country to speak directly with voters exploring the issues they care about during this election cycle. On Wednesday, September 11 “Nightline” will kick off a series that puts a spotlight on some of the leading 2020 Democratic presidential candidates before their political ambitions – interviewing friends, family, former classmates and faculty and others who knew the candidates during their formative years.

· ABC News Live will present the live one-hour pre-show before the debate and post-debate coverage and analysis with ABC News’ powerhouse political team.