“Sweet Taste of Liberty: A True Story of Slavery and Restitution in America” by W. Caleb McDaniel 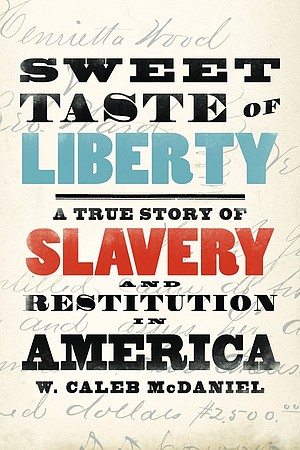 Be it ever so humble, there’s no place like it. It’s where your family is, where you hang your coat, where you keep your stuff. Even the word “home” equals safety and comfort, and in the new book “Sweet Taste of Liberty” by W. Caleb McDaniel, getting home could mean payback, too.

For many years, Zebulon Ward bragged about being “the last American… to pay for a slave,” but that wasn’t quite true.

He paid her, not for her, and Harriet Wood made sure he did.

Born in a small town in northern Kentucky, Wood guessed that she entered the world in 1818 or 1820, but no one knew for sure. Moses Tousey owned her then and when he died in 1834 after a series of misfortunes, she was sold to a Louisville man named Henry Forsyth. She toiled two years for him, and when Forsyth’s business fell on hard times, he sold Wood to William Cirode, a French immigrant who was living “a version of the American dream.” 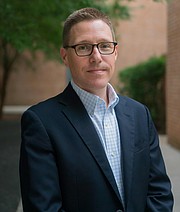 Cirode purchased Wood in Lexington and, because he was “restless,” he moved to New Orleans shortly afterward, taking her with him. Although he seemed to prosper there for a time, Cirode found himself in dire financial troubles in early 1844, so he abandoned his family and sailed to France. His wife, Jane, took the slaves she’d retained and returned to Kentucky, and then she took Wood to Ohio, which was a free state.

Agreements between Kentucky and Ohio meant that Harriet Wood was still a slave until Jane Cirode freed her, which happened at some point in 1848. Finally, Wood was free and she had the papers to prove it.

She didn’t have them with her, though, when Zebulon Ward conspired to kidnap her and take her to market to sell back into slavery. The papers never surfaced during a lawsuit challenging Ward’s ownership of Wood. She didn’t have them when he sold her down the river to Natchez.

And for seventeen years, she burned at what he’d done…

Don’t be surprised if, as you’re reading “Sweet Taste of Liberty,” you begin to feel rather overwhelmed. There’s a lot going on inside this book.

The names, firstly, may cause you to page back and forth to remember who’s who; that this is a highly-peopled account is only a part of the issue, never mind the similarity of some surnames. You’ll truly have to take your time here – which you won’t wish to do, since it’s a story you’ll want to gobble up.

Author W. Caleb McDaniel tells a breathless tale with an ominously dark feel through many of its pages, because the monsters here were real. Yes, it’s a complicated tale that races from north to south, but the righteous audacity that ultimately occurred in Ohio in 1870 makes it worthwhile, fist-pumping, and satisfying.

Historians, of course, will want “Sweet Taste of Liberty.” Feminists shouldn’t miss it. Folks with an opinion on reparations should find it. All of you will want to take it home.