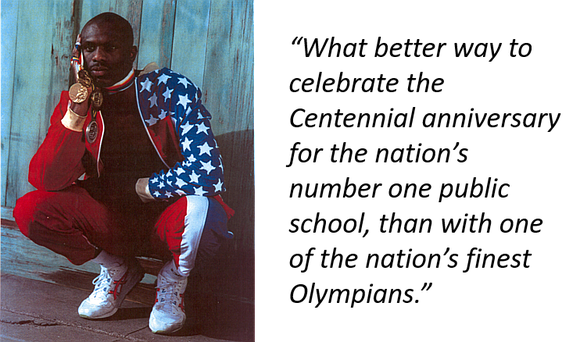 Three-time gold medalist Steve Lewis will be a special guest at the Let’s Play!™ pop-up ultimate game night event being hosted in Leimert Park in conjunction with the UCLA Black Alumni Association (UBAA). A UCLA alum, Steve represented the U.S. in the 1988 Seoul Olympics as a 19-year-old freshman winning the 400-meter dash and setting the world junior record with a time of 43.87. He won a silver medal in the 400-meter dash and a gold medal in the 4x400-meter relay with his team in the 1992 Barcelona Olympics.

Steve Lewis will facilitate a wildly entertaining Let’s Play!™ Olympic-style obstacle course at the game night event which will include alum from UCLA, USC, and other California universities. His special appearance at Let’s Play!™ will help celebrate UBAA’s homecoming weekend commemorating UCLA’s Centennial. “We are excited to have one of UBAA’s own join the nostalgic fun that Let’s Play has to offer,” said UBAA President Michelle Johnson. “What better way to celebrate the Centennial anniversary for the nation’s number one public school, than with one of the nation’s finest Olympians.”

The Let’s Play!™ pop-up in Leimert Park will take place Friday, October 25, 2019 from 7:00PM to 2:00AM. The evening event follows the UBAA tailgate at the Rose Bowl for the UCLA Bruins v. Arizona State Sun Devils football game.

To follow the latest homecoming news on social media, use the hashtags #LetsPLAY, #UBAA2019 and #Black2Westwood.