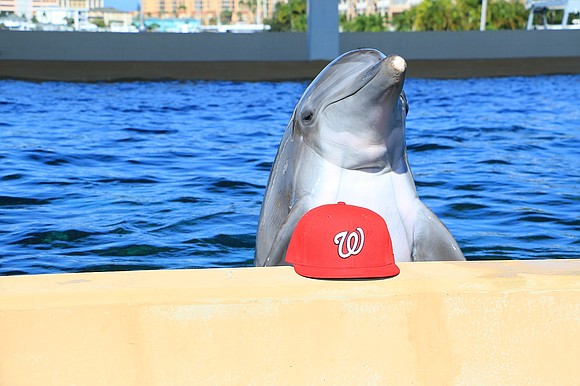 Will the powerhouse Houston Astros beat the surprising Washington Nationals in the 2019 World Series? With the first game of the series matchup happening tonight at 8:08 p.m. EST, Nicholas the rescued dolphin at Clearwater Marine Aquarium has selected the National League champion Washington Nationals to take the pennant. When the Astros were in the 2017 playoffs, Nick surprised Vegas when he chose them to win the World Series. Now in 2019, he has another surprising selection! Sorry, Astros fans.

Nicholas is a rescued bottlenose dolphin that was found stranded in 2002 with severe sunburns. He was orphaned and unable to learn necessary survival skills as a calf, therefore he became a permanent resident at Clearwater Marine Aquarium. Making unbelievable sports predictions is just one of Nick’s many talents he has demonstrated and is a special part of his animal enrichment.