Turner to Face Tony In Runoff for Houston Mayor 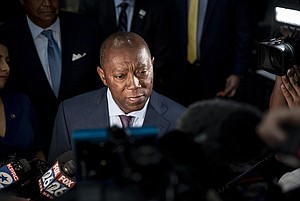 Houston Mayor Sylvester Turner is heading to a runoff against high-profile attorney Tony Buzbee in his rowdy reelection race. With all vote centers reporting Wednesday morning, Turner had 47% of the vote in unofficial returns to 28% for Buzbee. Turner was around 7,800 votes short of winning enough of the vote — over 50% — to avert an overtime round. The runoff is set for Dec. 14. Bill King, who narrowly lost to Turner in the 2015 mayoral runoff, came in third Tuesday with 14%, while City Councilman Dwight Boykins finished fourth with 6%. Turner faced 11 challengers, but only a few were seen as serious. There was massive delay in results from Harris County, where the almost-complete numbers were not released until about 6:30 a.m. Wednesday.