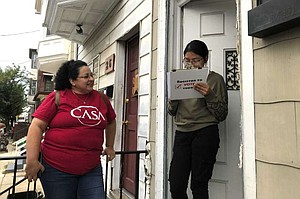 President Donald Trump's reelection campaign is making contrarian appeals in the most unusual places, trying to win over Hispanic voters in states not known for them, like Pennsylvania. His second campaign, far better financed and organized than his first, is pressing every potential tactical advantage, including trying to capture even small slivers of the Hispanic vote, hoping it adds up to the narrowest of winning margins. "I think that you win campaigns with what we call 'tajaditos.' Little bits. You have to have a little bit of this and a little bit of that," said Bertica Cabrera Morris, a Cuba native and "Latinos For Trump" advisory board member. "You don't need everyone from every group, but you have to have a little bit of everything." For many reasons, not the least of which is the president's hostility toward immigrants, it will be a difficult sell.