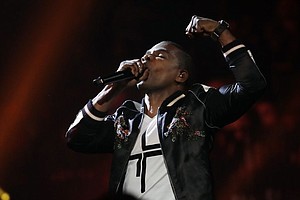 Gospel music artist Kirk Franklin posted a video on Monday saying he will boycott the Gospel Music Association’s Dove Awards after comments he made were edited out when they were televised. Franklin said that parts of his acceptance speech in 2016 and again in 2019 were removed when they were broadcast on the Christian television network Trinity Broadcasting Network. “Not only did they edit my speech, they edited the African American experience,” he said. The Grammy-winning artist won several Dove Awards, including gospel artist of the year, at the 50th annual awards, held in Nashville on Oct. 15. Franklin, who has spent the past 20 weeks on Billboard’s Gospel Songwriters Chart, said he will not attend any events affiliated with the Dove Awards, the Gospel Music Association or TBN “until tangible plans are put in place to protect and champion diversity.”