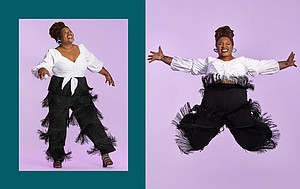 NEW YORK – May 6, 2019 – ELOQUII, the trend-driven retailer for women sizes 14-28, announced today their mission to challenge unconscious bias in the workplace and beyond with the launch of their first-ever advertising campaign, #MODELTHAT. Shedding light on the preconceived notions around the profile of a woman behind a certain career, the national campaign features a former chef and ultra-marathon runner, a state-elected representative, Emmy award-winning TV producer, chief engineer, costume designer, army vet and registered nurse, along with a law enforcement professional. ELOQUII has always been a brand dedicated to their customer, spotlighting women with extraordinary style accomplishing extraordinary things, and #MODELTHAT will amplify the conversation around the daily bias women size 14+ face.

The female led #MODELTHAT campaign launches with a series of photographs taken by Dana Scruggs and a video spot directed by Justyna Grzybowska with styling by Mecca Williams, featuring women speaking to the impact they make in their corner of the world. Created by Bullish, the campaign aesthetic combines ELOQUII’s signature bold colors and distinct patterns to showcase the vibrant personalities and inspiring professions of the women featured. The cast includes Alison, a law enforcement professional who dedicates her life to protect our country and others; Alma, the youngest elected State Representative in Arizona who focuses on helping others through her policy work; Akilah, a selfless mom of four, army vet, poet and registered nurse; Kristen, a renowned costume designer and special effects makeup artist; Latoya, a former chef and ultra-marathoner; Palencia, a Deputy Director and Chief Engineer of Detroit Water and Sewerage Department, overseeing a $500 million program to help rebuild Detroit and Sarah, a four-time Emmy award winning TV producer.

“Research shows that weight discrimination and stigmatization are becoming more prevalent in the workplace (Flint and Snook, 2014),” said Mariah Chase, CEO of ELOQUII. “Our #MODELTHAT campaign challenges the unconscious bias that can sometimes lead to stigmatizing, stereotyping or underestimating a woman’s talents, abilities or accomplishments based on her body. We at ELOQUII believe deeply in the power of fashion to help women control their true narrative. We're inspired by outfitting these incredible female role models and showcasing real women sends the message that it’s about who you are, how you feel and how you change your corner of the world.’”

“Our customers are inspiring, accomplished women who lead extraordinary lives and with the launch of #MODELTHAT, we want to shine light on these women and their impact,” said Kristen Campolattaro, ELOQUII’s Head of Brand Marketing and Customer Insights. “As a brand that strives to creative positive change through the transformational power of fashion, showcasing role models in our fashion-forward styles sends a powerful message--see people for their accomplishments, not their size.

Timed with the #MODELTHAT campaign, ELOQUII will open their sixth store, located in New York City’s SoHo shopping district, back my customer demand. The 2,500 square foot space located on 120 Wooster Street marks ELOQUII as the only retailer dedicated to sizes 14+ in one of the city’s most popular shopping areas.