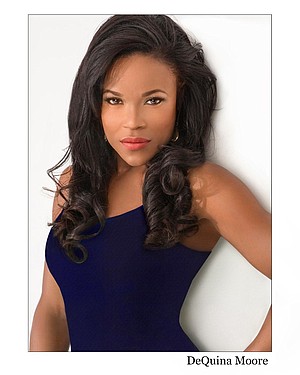 Actress DeQuina Moore is a Houston native who discovered her passion for the arts at an early age. She began honing her skills at The Ensemble Theatre where she discovered she held a multitude of talents that later landed her on Broadway, and into television and film.

“This is truly a full-circle moment for me to return to The Ensemble Theatre where I started as a youth,” says Moore. “The icing on the cake is also having the incredible opportunity to embrace the role of entertainment icon Josephine Baker!”

Josephine Tonight book and lyrics were written by Sherman Yellen with music by Wally Harper. The Ensemble Theatre’s musical duo, director & choreographer Patdro Harris, and musical director Chika Kaba Ma’atunde, have returned to Houston bringing their flare to another story.

“We are both very excited to join The Ensemble Theatre in celebrating the life of Josephine Baker through this work,” says Harris. “DeQuina is a perfect choice to demonstrate Ms. Baker’s talent and her strength as an activist.”

A musical biography of showbiz legend Josephine Baker. Josephine Tonight draws on the early life of the internationally known singer, actress and nightclub sensation who wowed audiences in America and Europe in the first quarter of the 20th century, and reveals the relationship of the young Josephine and her laundress mother who steers her toward success and then guides her to remember her roots.