How Do You Like Your Flower? Cauliflower That Is! 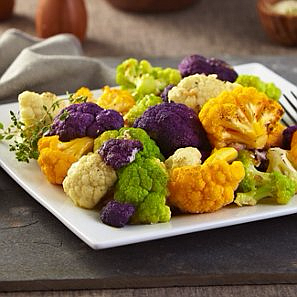 While red roses will be the highest selling flower this week, we are focusing on another type of flower in this edition of Eating with Style...Cauliflower. Cauliflower has risen to stardom faster than Cardi B. It is all the rave and a featured edible item. I know you have seen the IG pictures, Facebook posts, and tweets of everyone making cauliflower pizza. The carb replacing vegetable that was only seen on American tables as a steamed vegetable medley, today has endless possibilities.

When cooking, the outer leaves and thick stalks are typically removed, leaving only the florets (the edible "curd" or "head"). After eight minutes of steaming, or five minutes of boiling, the florets should be soft, but not mushy (depending on size). Stirring while cooking can break the florets into smaller, uneven pieces. Cauliflower heads can be roasted, grilled, boiled, fried, steamed, pickled, or eaten raw. 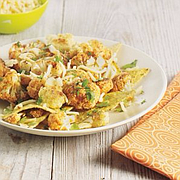 So the question is have you tried it? Well, I have and let me tell you it is a huge help in losing weight and maintaining a healthy weight/lifestyle. Already high in vitamins and minerals, I have been using cauliflower as a starch replacement, which allows me to cut carbs and fat. Most people use it as a rice replacement, which of course, that’s my main usage however, I did step out and made cauliflower garlic bread. Let me tell you it was absolutely amazing! I even took some for lunch the next day and it was even better!

If you are thinking about experimenting with cauliflower here are a couple of warnings for you. Be quick about it! Like most fresh vegetables, cauliflower doesn't have a sell by date, a best before date or a use by date, so you have to be based on the date when you have purchased this vegetable. Approximately, cauliflower can last about two weeks in the fridge. If it has been already processed into rice and you buy it that way from the store it goes bad in days! So make sure you are ready to use when you purchase it.

Also, understand that you will be experimenting and it will take some time to perfect a specific recipe. When I made cauliflower pizza my crust was too eggy and I had to throw it away after two slices. Additionally, it didn’t need a lot of sauce because it was already wet. Realize its limitations. Cauliflower is just that, a vegetable and where you can often disguise its flavor, it will still be there. That veggie taste is still present, it may be faint but it is there. You really have to process it to remove the texture as well so if you’re sensitive to texture do your due diligence. 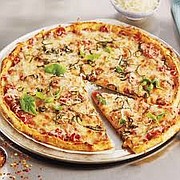 Finally, restaurants are getting the hint. California Pizza Kitchen has a cauliflower pizza that’s really good. It’s mixed with a little bit of wheat flour so if you’re cutting that out, don’t try it. But if you’re looking for a healthy alternative their cauliflower pizza is amazing! More and more restaurants are offering cauliflower rice as an alternative. And of course, visit your local H-E-B for everything cauliflower. The possibilities I mentioned earlier can be found in the frozen food section.

*If you decide to try it out, tag us in your photos and hashtag #EatingWithStyle