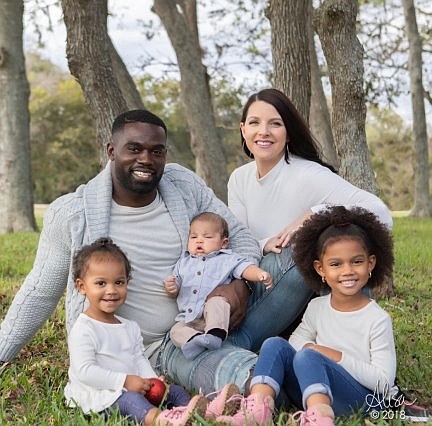 James and Brittany Ihedigbo and their children (left to right) Ava, Jeremiah and Grace

Education-based child care may seem an unconventional second career for an 10-year NFL Pro Safety, but the Ihedigbo’s have a long family history of community service centered around education.

James’ mother, Dr. Rose Ihedigbo, has been an Early Care and Education Specialist for over 30 years, and his father, who passed in 2002, was a staunch advocate for creating educational opportunities for children, even building a vocational school for children in their native country of Nigeria.

When James was drafted to the NFL in 2007, he launched the Hope Africa USA Educational Foundation with his wife Brittany and used his new professional platform to further his father’s dream of higher education for all, by helping over 50 students across the country pay for college tuition.

“Making a difference in the lives of children been a big priority in my family for as long as I can remember,” said James. “Brittany and I are parents ourselves, and Brittany is a nurse, so we wanted to open a business that aligned well with our goals as parents, caregivers and educational providers. Kiddie Academy was a perfect fit, and we’re proud to own and operate an award-winning franchise in Rosharon, and are really looking forward to this new opportunity to help children in League City develop the confidence and skills they need to meet the challenges of tomorrow.”

The League City Kiddie Academies have been in operation for the past 12 years. The Ihedigbos will take ownership of the new Academies this month, to ensure a smooth transition for enrolled families before the start of a new school year.

James is a retired professional football player, with a 10-year NFL career, including a Super Bowl Championship with the Baltimore Ravens in 2012, and defensive positions with the New York Jets, New England Patriots, Detroit Lions and the Buffalo Bills. Both James and Brittany hold degrees from the University of Massachusetts. Their Kiddie Academy Lakes of Savannah has received national recognition for Best Practices in Social Media, Community Building, and Health and Fitness. The couple recently received the “Star Maker” award for excellence at Kiddie Academy’s 2019 National Conference.

Kiddie Academy® is the leading provider of comprehensive education-based child care programs for children ages 6 weeks through 12 years old. The campuses serve area families and their children by offering quality education and the highest standards of child care in full time care, before-school and after-school care, and summer camp programs.