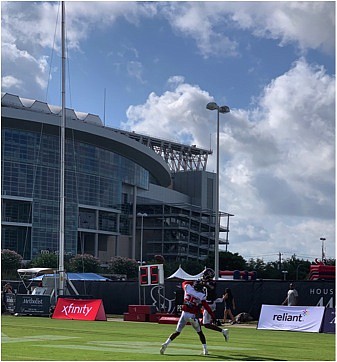 The Houston Texans were back on the practice field as they prepare for their second preseason game against the Detroit Lions this Saturday at NRG Stadium. Here are just a couple of things I observed at Texans training camp day 12.

Rookie Charles Omenihu is making his presence felt on the field. Drafted out of the University of Texas, the 6’5/280-pound defensive end had one of his better practices on Sunday. He displayed quickness getting off the line, but also showed how strong he is during the 11 vs 11 drills. Omenihu drove veteran left tackle Matt Kalil into the backfield on numerous plays that caught the eye of his position coach Anthony Weaver. 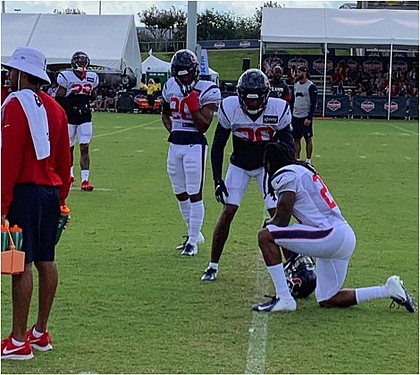 It is good to see WR DeAndre Carter back on the field for the Texans. He came into camp on the physically unable to perform list but is back just in time as the Texans suffered a huge blow to their receiving group during the first preseason game when WR KeKe Coutee went down with a lower leg injury. Carter’s presence will also help fill a void left by Coutee on the special teams. Last year he returned nine kickoffs for 221 yards and fielded 16 punts for 146 yards.

“It’s very important to him,” said Bill O’Brien. “He’s got to make the team. He’s got to perform well. He’s smart, tough, dependable – that’s what you are looking for.”

Practice intensified once again during the goal line session. Rookie running back out of Missouri is taking advantage of all the opportunities given to him. He used his strong powerful stature to get through the defense to score on multiple occasions. Even with the signing of RB Duke Johnson from the Cleveland Browns, Crockett will make an impact if he makes the team. 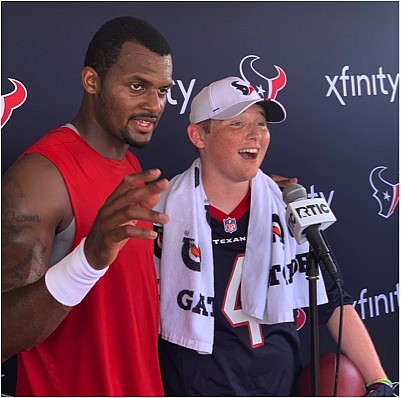 Deshaun Watson had a special guest with him at practice on Sunday. Ethan Hughes, a senior from Cy-Creek High School who is battling leukemia was in attendance to watch his favorite player (Watson) and team (Texans).

“I am a little winded because I got some lobs from Deshaun over there,” said the 17-year old who takes chemo pills every day in his battle with cancer.

Watson was excited to see Ethan out on the field with him knowing how tough it is to be diagnosed with cancer as he watched his mother battle tongue cancer when he was younger.

“To have a guy like himself to continue to work hard and never get discouraged and continue to push forward,” Watson said. “My mom had tongue cancer, so I know exactly what he is going through with the chemo and radiation. It’s really good to see Ethan walk around with a smile on his face and in great spirit.”

The Texans will be back on the field Monday for the last time before two joint practices with the Detroit Lions.