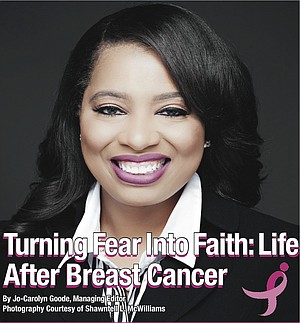 Fear and faith are not supposed to coexist. Faith is supposed to conquer all fears. When real life happens faith can waver. Faith can be questioned. Faith can even disappear. Just as easily as faith did all the things above, faith can also comfort. Faith can bring peace. Faith can come back. Shawntell L. McWilliams knows the fear and the faith journey. Six years ago she was forced to face fear and her faith was tested. In the end, her greatest fears were turned into her strongest faith.

It was the start of a new chapter for McWilliams in 2012. She had just married her one true love, Keith McWilliams. She had a wonderful family and plenty of friends. Her career was firmly in place and she was on the rise. Everything was falling into place. She indeed was living her best life until her worst fears came to past. 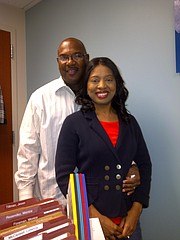 All of McWilliams’ life a very unhealthy fear occupied her mind daily. Although she had no family history of the illness or any risks of obtaining, McWilliams was scared that she would be diagnosed with breast cancer. She was so painfully afraid of the idea of having breast cancer that it took over her thoughts, speech, and life. And then one day it took over her body.

While going through her daily routine she felt a lump. Instantly, she knew it was breast cancer. Even though she had that immediate thought she went into denial mode and ignore it (at least she tried to). A few days later she decided to talk to her mother, who is a nurse, about it. Her mother eased her fears and said stop drinking so much coffee and go get it checked out. Seeing that her mother had such a relaxed attitude made her feel comfortable in scheduling a mammogram. Next, she contacted her sister who worked at M.D. Anderson to help her book the exam. The two also planned a lunch date after the test. That date never happened because a short time later McWilliams got the news that turned that flipped her world. The doctor gave her the devastating news that she had breast cancer and not just any type of breast cancer, but stage 3b triple positive and Her2 positive breast cancer. She was just 38 years old.

Allow me to break down her illness. In general, breast cancer is a disease in which normal cells in the breast grow out of control to form a tumor. From there breast cancer is broken down into stages from zero to Roman Numeral IV followed by a letter between A-C. So the higher the number the more advanced the cancer is. Stage 3b, like McWilliams had, meant her cancer had spread but not to her vital organs. It also may have invaded her nearby lymph nodes. Looking at the Her2 positive part of her diagnosis meant that her cells were making too much protein. This type of cancer is extremely aggressive and fast growing.

Hit with that news sent McWilliams in quickly moving downward swirl. A world wind of emotions flooded her brain and none dealt with her getting treatment or fighting the disease. Convinced that the breast cancer was a punishment from God, McWilliams said she didn’t want treatment. She didn’t want to fight. “I was very depressed and hurt,” she recalled. As questions of “Why me?” filler her head, family and friends begged her to get treatment. Her doctor told her if she didn’t seek treatment she would be dead in six months. Her response was, “That’s absolutely fine.” She was convinced breast cancer was a death sentence. In her opinion, she felt like she was losing her control and refusing to fight was her way of staying in control. It was also her response to the fear that still lurked inside her. “I was scared. I was trying to take control over the situation instead of looking at it differently,” said McWilliams.

Pink Survivor Gala thrown in Shawntell's honor in her hometown of Shreveport, LA

Faith stepped in. Not her faith but that of her family and friends. They stood in the gap praying for her. The prayers of the saints worked and McWilliams said she would give chemotherapy a try. She was diagnosed on a Wednesday and started chemotherapy on a Sunday, the Lord’s Day. God works in mysterious ways.

McWilliams underwent six months of chemotherapy every week, six weeks of radiation therapy following that, and finally a year of Herceptin (another type of chemotherapy to treat Her2 positive breast cancer). She lost her hair, some nails and lots of weight. Unlike most cancer patients, McWilliams never experienced nausea. She credits that to the strict instructions she followed on taking the medicine used to combat nausea. Besides following that order, Williams exercised by walking and resting for at least two hours daily. “I think what was key for me was really drinking all the water and eating a healthy diet,” said McWilliams. She drank eight to ten bottles of water daily. The healthy diet she adhered to was only during the week since her best friend would come on the weekends to cook soul food to fatten her size 00 frame up.

Treatment took a toll on her body. She would have blood clots and be diagnosed with polymyositis (a condition that breaks down muscle). At one point, McWilliams couldn’t even walk. In those lowest points, she said three things helped her cope – the support system of her family and friends, journaling her feelings, and staying spiritually fed by listening to Gospel recording artist Marvin Sapp. 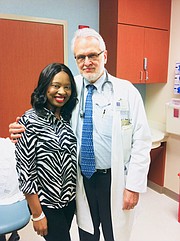 McWilliams is now cancer free and instead of being fearful, she is faithful. “I didn’t realize that going through it made me who I am. It gave me my purpose. It made me a different Shawntell. So I am so grateful that I have a new layer of who I am because of it. I really am.” She continued, “I learned truly about my strength, my tenacity. I feel if I can get through something like that I can get through anything in life. It taught me the power of positive thinking and having faith.” McWilliams also learned the value of serving others. She devotes a good portion of life today to do just that. It was something she did while going through chemotherapy. “It made me normal. Doing those things in the community really kept me normal. There is true value in serving others. When you are not at your best and when you are down, you need to serve others at that moment. You have to be of service in the community to have everything full circle,” said a humbled McWilliams.

Six years cancer free, McWilliams says that she is still in fighting mode against cancer. A day does not go by that she doesn’t reflect on her cancer journey or her fears of breast cancer that still linger. “You never really heal emotionally from it,” she commented. “The mind is a strong weapon. Its a lot of things you have to fight daily still.”

Today McWilliams is thriving in life. After years of working in education, McWilliams’ life has taken a different turn post breast cancer. Now she lives in her purpose and does what she is passionate about. She had a stint working for Sisters Network Inc. and now the Shreveport, Louisiana native is an entrepreneur. She is the CEO of Infinity Cleaning Solutions, a female owned and operated commercial cleaning company and is President of SM Global Consulting, a philanthropic branding, community relations, and event production company. She lends her time to countless charitable organizations including the National Kidney Foundation, Greater Houston Women Chamber of Commerce, The Fifth Ward Enrichment Program, Colitis Foundation of America, United Negro College Fund, The Ensemble Theatre, and the list goes on. Her work has made her the recipient of numerous awards such as National Women of Achievement’s Pillar of Strength Award, 2017 ABC-13 Woman of Distinction, 2018 Houston Chronicle Best Dressed, St Jude’s Cancer and Research Hospital Community Award, Houston League of Business and Professional Women’s Trailblazer Award, and 2018 Texas Children’s Hospital Community Champion. In addition, she is affiliated with a plethora of organizations including Alpha Kappa Alpha Sorority, Inc., The Links, Inc., and the Junior League of Houston. She also sits on many foundation boards like the Greater Houston Women Chamber of Commerce. Being active in the community is her middle name. 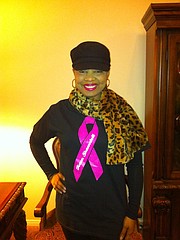 She is also a fierce health advocate preaching and encouraging others daily to do the same. “If you feel something and you know that it is not normal I would encourage them to go to the doctor. Don’t ignore it. Don’t put it off,” she said. Her advice is to go to the doctor ready to take notes and ask questions. Don’t just rely on what medical professionals tell you. Ask to see your lab results. Do your own research. “The medical team will respond differently to you when you are like that. They really respect that,” she said.

Shawntell McWilliams is a walking, living testimony with a story of how she turned her fears into faith. And with faith any and everything is possible.

In honor of yourself and breast cancer awareness month give yourself the gift of a mammogram and pass the gift on to a friend. Be your own health advocate. Early detection is key!