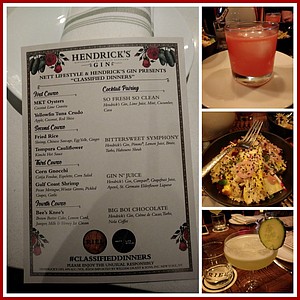 Team Style Magazine sat among other local foodies and invited guests to sample some selected dishes from Riel's menu along with a cocktail pairing that featured Hendrick's Gin.

The Classified Dinner concept is the idea of Kevin Barnett of Nett Style, who simply stated the purpose as“ “Gathering Houston’s most influential people for an evening provides an opportunity to share ideas, discuss community topics, discover what other influencers are enjoying and collectively push Houston’s culture forward. “

Barnett hosted the evening along with Hendrick's Gin U.S. Ambassador Mattias Dylan Horseman. Our evening began with an introduction to the eclectically laid out four-course menu and the cocktails that were paired with each.

The first course of MKT Oysters and “So Fresh So Clean” cocktail arrived and disappeared with a camera flash. The shellfish was served raw with a splash of coconut Lime Granita. The second course arrived quickly, it was Fried Rice made with and without the shrimp for those of us with seafood allergies. The rice also contained Chinese sausage, egg yolk, and ginger and was one of the most unique versions of fried rice that I have experienced. The rice was very light, well-seasoned, and contained crispy vegetables that made the dish pair perfectly with our Bittersweet Symphony cocktail that consisted of Hendrick's Gin, Pimms, Lemon Juice, Bruto, Turbo, and Habernero Shrub.

However, the “show stopper” in my opinion was the Tempura Cauliflower; the vegetables were lightly battered, seasoned, fried, and served with a kimchi hotsauce. This was a tasty plate of veggies that burst with flavor, and had this writer just saying, “wow, I was not expecting that!” Courses three and four were Corn Gnocchi, Gulf Coast Shrimp which was paired with the Gin N' Juice cocktail.

We finished the evening with a dessert called “Bees Knee's” which was a Brown Butter Cake, Lemon Curd, Juniper, Milk & Honey Ice Cream. I enjoyed this decadent and mouth-watering dish with a strong cup of coffee, while our table indulged in Big Boi Chocolate cocktail that was made with Gin, Creme De Cacao, Turbo, and Nola Coffee.

For anyone who has not visited Riel yet, they are open six days a week beginning at 5pm until 10 pm weekdays, and are open until 11 pm on Saturdays. Check out their full menu: www.rielhtx.com.