Texas City Resident Could Be The Next Food Network Star 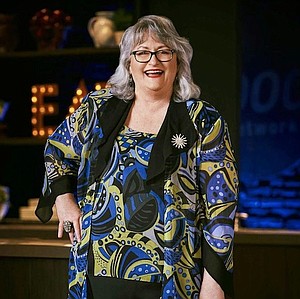 The Season premiere of Season 13 of Next Food Network Star is set to air Sunday, June 4, 2017, and Chef Nancy Manlove has set her sights on winning the top prize. This competitive cook is not afraid to challenge herself. In fact, this dynamic personality has won several recipe competitions; she beat out several other cooks from around the country and won a trip to Italy by entering around 50 of her own creations in a contest held by Barilla Pasta.

In her quest to become the Next Food Network Star Manlove states her point of view as, “I’m going to hopefully inspire other generations to pick up a spatula, turn an egg, cook some bacon, maybe visit with other nanas and gigis and grandmothers. We all learn from moms and grandmothers, and I want to instill that in a cooking show.” She is one of eight children who enjoyed their mother’s meals that were prepared daily, while her father supported the family as a sergeant in the military.

Moreover, Manlove is a wife, mother of four in a blended family, and has 8 grandchildren. She stated that “she absolutely enjoys having the family over for dinner, and wish they would come more often.” Her family is confident, as well as proud of her, and anticipates that she will do well on this adventure she’s on with The Food Network.

Manlove is a former employee of NASA, one of her jobs was to process data, and she even worked on a project that involved The Space Shuttle. After leaving her job at The Space Center, Manlove became a student again and earned her Culinary Arts Degree. She said she “felt inspired to learn more of the technical aspects of cooking” which could only help become better at something that truly enjoyed.

Additionally, Manlove is not afraid of the camera, in 2015, she outmaneuvered three other competitors on an episode of The Food Network’s Cut Throat kitchen, and took home a whopping $12, 800. Currently, she is “The Chef de Cusine” at Eculent Restaurant in Kemah, Texas where the menu is based on seasons and the food is sourced from local farmers.

Finally, to learn more about Chef Nancy and the other cast of Next Food Network Star, go to:

http://www.foodnetwork.com/videos/full-episodes/food-network-star. Learn more about Chef Nancy and the other cast of Next Food Network Star, go to: