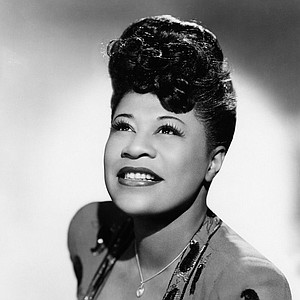 Fitzgerald, who would have turned 100 today, was one of the most beloved and versatile singers of the 20th century. In a career that spanned six decades, Fitzgerald recorded hundreds of songs, including definitive versions of many standards. Along the way, she influenced generations of singers.

But the first thing that strikes you about Fitzgerald is that voice.

Cécile McLorin Salvant, who won a Grammy last year for Best Jazz Vocal Album, says a combination of qualities made Fitzgerald’s voice unique. “When you hear the tone of her voice — which has kind of a brightness, kind of a breathiness, but it also has this really great depth, and kind of a laser-like, really clear quality to it — it hits you,” she says.

Salvant, 27, says she learned to sing jazz standards by listening to Fitzgerald’s versions.

“I remember being 17 and living in France and feeling really homesick and wanting to go back to Miami, and listening to Ella Fitzgerald singing ‘I Didn’t Know What Time It Was,’ ” Salvant says. “And I would listen to that all day. All day. For, like, weeks. And it felt — it created a home for me.”

Fitzgerald had perfect pitch, impeccable diction and a remarkable sense of rhythm. And it all came naturally to her, as she told the CBC in 1974. “What I sing is only what I feel,” she said. “I had some lady ask me the other day about music lessons and I never — except for what I had to learn for my half-credit in school — I’ve never given it a thought. I’ve never taken breathing lessons. I had to go for myself, and I guess that’s how I got a style.”

http://bjazz.unblog.fr/music/musician... http://www.bojazz.com/ Ella Fitzgerald & the Tee Carson trio - Summertime (from Porgy and Bess, by George Gershwin). The first lady of song in Berlin, 1968. Beautiful mother singing a lullaby to her baby. Summertime lyrics Songwriters: George & Ira Gershwin, Du Bose & Dorothy Heyward Summertime, And the livin' is easy Fish are jumpin' And the cotton is high Oh, Your daddy's rich And your mamma's good lookin' So hush little baby Don't you cry One of these mornings You're going to rise up singing Then you'll spread your wings And you'll take to the sky But 'til that morning There's a'nothing can harm you With your daddy and mammy Standing by Don't you cry

That style was an immediate hit. Fitzgerald was discovered at an amateur contest and began her professional career when she was only 16, singing with the Chick Webb Orchestra at Harlem’s Savoy Ballroom. When she was 21, she became internationally famous with a hit record based on a nursery rhyme, “A-Tisket, A-Tasket.”

Tony Bennett says that when he was starting out as a young singer, Ella Fitzgerald was his idol. “She was a complete swinger,” he says. “She just understood the whole art of jazz phrasing.” Continue reading →