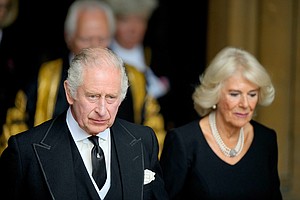 (CNN) -- King Charles III and his wife Camilla, the Queen Consort, visited Northern Ireland on Tuesday, as thousands of people filed past the Queen's coffin lying in state in Edinburgh.

This is Charles' first trip to Northern Ireland as the United Kingdom's new monarch, following in the footsteps of his mother, who was seen as a symbol of the union and was an important figure during Northern Ireland's peace process.

Tuesday's historic visit saw the King arrive at the royal residence, Hillsborough Castle, where he greeted the public and looked at floral tributes. There he met with the Secretary of State for Northern Ireland, Chris Heaton-Harris, and the leaders of Northern Ireland's biggest political parties.

Charles and Camilla received a message of condolence by the Speaker of the Northern Ireland Assembly Alex Maskey, to which the King replied: "In the years since she began her long life of public service, my mother saw Northern Ireland pass through momentous and historic changes. Through all those years, she never ceased to pray for the best of times for this place and for its people."

King Charles added that he would follow his mother's example of dedicating "herself to her country and her people and to maintain the principles of constitutional government."

Following the reception at the castle, the King and the Queen Consort are attending an afternoon service of prayer and reflection at St. Anne's Cathedral in Belfast. They will be introduced to faith and community leaders from across Northern Ireland. More than 800 people are expected to take part in the religious service.

His visit comes at an uneasy moment for Northern Ireland, where political tensions are high and key issues around Brexit remain unresolved.

While the majority of the country voted to remain in the European Union in the 2016 referendum, the UK's ruling Conservative Party signed a Brexit deal that created new customs barriers between Northern Ireland and mainland Britain.

Queen Elizabeth II was the monarch for 70 years of Northern Ireland's 101-year history.

She was Queen during the 30 bloody years of violence known as "The Troubles," which pitted UK unionists against Irish nationalists, with the British Crown emblematic of much that divided the province.

Unionists are loyal to the Crown and the traditional British values they believe it enshrines. For Irish nationalists, it is the symbol of the British forces who subjugated their ancestors and annexed their land.

Louis Mountbatten, the last British Viceroy to India and Charles' favorite great-uncle, was murdered by the Irish Republicans along with several of his grandchildren in 1979.

The Queen publicly put aside those differences during a 2012 visit to Northern Ireland, shaking the hand of Martin McGuinness, one of the republicans most associated with the violence of the past.

Charles also shook hands with Gerry Adams in 2015, seen as another milestone in the fragile peace process as Adams had long been associated with the Irish Republican Army (IRA), once considered the armed wing of Sinn Fein which is now the largest party in Northern Ireland.

Sinn Fein, the nationalist party which is pressing for a united Ireland, did not attend Sunday's proclamation of King Charles at Hillsborough Castle. The King and the Queen Consort will return to London later on Tuesday.

In Edinburgh, mourners queued outside St. Giles' Cathedral on Monday evening for their turn to pay their respects to Queen Elizabeth II's coffin inside the cathedral.

The queue to the cathedral closed to the public on Tuesday afternoon. Later in the day, the Queen's coffin is expected to be carried out of St. Giles' and flown to London before being driven to Buckingham Palace to rest in the Bow Room overnight.

The Scottish government said more than 26,000 people got to pay their last respects to the Queen.

To get updates on the British Royal Family sent to your inbox, sign up for CNN's Royal News newsletter.