The problem that should be keeping Liz Truss awake at night 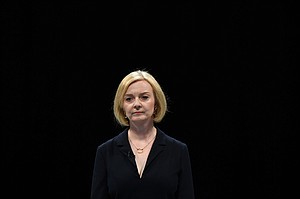 (CNN) -- Liz Truss has a lot on her plate. The United Kingdom is heading for a recession. Workers are going on strike as inflation erodes their living standards. And millions of people and thousands of businesses need immediate relief from soaring energy bills to get through the winter.

"This is a tough time for the economy," former Prime Minister Boris Johnson conceded Tuesday in his farewell speech.

Speaking on her arrival in Downing Street, Truss said she would "ride out the storm," promising help with energy bills as well as tax cuts. But the incoming prime minister is in a bind. If her government borrows a lot of money, it risks further fanning inflation and inflaming burgeoning fears among investors that the country's finances are becoming unsustainable.

That could send the pound into a tailspin, which would further drive up prices and make it harder to pay for essential imports.

In other words, the United Kingdom could endure the type of meltdown it suffered in the 1970s, when the combination of an energy shock, rising prices and hefty government spending forced the country to turn to the International Monetary Fund for a big bailout — an alarming prospect for a G7 economy.

Not long ago, this type of scenario would have sounded outlandish as a talking point. But as Truss teases a huge energy relief package and talks of tax cuts, and the pound remains mired near its lowest level in decades — some analysts are warning that a "balance of payments" crisis can't be ruled out.

"Ultimately, whether these risks materialize boils down to the credibility of policy from the new government in coming weeks and months," Deutsche Bank strategist Shreyas Gopal said in a note to clients on Monday titled "Crunch time for sterling."

What is a balance-of-payments crisis?

The former governor of the Bank of England, Mark Carney, once observed that the United Kingdom depends on the "kindness of strangers." That's because it runs a big current account deficit, meaning it needs foreign investors to keep pumping money into the economy so it can pay for imports and meet other important obligations.

If they lose confidence, turmoil in the financial system can quickly snowball. As traders dump the country's currency, its value plunges, feeding inflation and compelling the central bank to hike interest rates even higher to try to get the situation under control. That can worsen recessionary conditions, and so the spiral continues.

Investors typically look for these circumstances to crop up in emerging markets — especially those that hold debt in dollars. When their currency drops, that makes it even costlier to pay back their obligations. The most commonly touted example these days is Argentina, which signed a $44 billion debt deal with the IMF in March.

Yet there is precedent in the United Kingdom. When the pound quickly lost value against the US dollar in the mid-1970s, the country was forced to ask the IMF for $3.9 billion, Gopal noted. At the time, that was the largest amount ever requested.

The pound is on the ropes again now. It dropped briefly on Monday to about $1.14, its lowest level since 1985. It's lost nearly 15% of its value against the US dollar so far this year. That's even worse than the euro, which has dropped less than 13%. UK government borrowing costs are also rising at a rapid clip as investors dump the country's bonds.

Investors are fleeing British assets because of concerns about the economy. UK inflation is the highest in the G7, and could shoot up further next year if the natural gas prices remain elevated. The Bank of England has been hiking interest rates since last December and may be forced to take even more aggressive action.

"UK assets are very unloved at the moment," said Paul O'Connor, head of the UK-based multi-asset team at Janus Henderson. "The core reason, of course, is the UK is facing a really acute cost-of-living crisis and significant political uncertainty surrounding that."

That's a major problem for the United Kingdom because it has a record current account deficit, according to Gopal, which means it spends more on goods, services and investments abroad than it brings in at home. Years of anemic growth and a hit to trade after Brexit haven't helped.

The United Kingdom isn't Argentina, but ...

The currency ticked slightly higher on Tuesday as Truss officially began her tenure as prime minister.

Investors were heartened by early reports about her plans to address the energy crisis, which are expected to be announced this week. She's expected to announce a cap on energy bills by borrowing £100 billion ($115 billion). That would exceed even the €95 billion ($94 billion) the German government has committed to tackle similar problems.

"Investors do regard this as a fairly decisive way to ease recession risks in the UK," O'Connor said.

But questions could resurface about how she plans to pay for that relief package, and other campaign pledges — such as jacking up defense spending and reversing proposed business and payroll tax increases — and whether investors will become worried that UK borrowing could get out of hand.

"Having a real financial crisis — and the pound falling, if that accelerates — that is a serious, serious problem for real people, day by day," former UK finance minister Ken Clarke told the BBC on Tuesday. He's been critical of Truss' plans to slash taxes, which she claims will help fund spending increases by boosting economic growth.

Viraj Patel, global macro strategist at Vanda Research, thinks the fears are overblown. He puts the probability of a balance-of-payments crisis in the United Kingdom at less than 5%.

"A lot of things have to go wrong to get to this point — and one would imagine the UK government pivots quickly before then on any policies that are driving concerns," Patel said, adding that fiscal watchdogs such as the Office for Budget Responsibility are watching the situation closely.

Deutsche Bank's Gopal acknowledged that the United Kingdom is different from countries like Argentina in a key way: It issues debt in its own currency, which means that when the pound drops, it doesn't face additional concerns about repaying liabilities. Still, he continued, it's not a given that investors start to come back onside.

"With the global macro backdrop so uncertain, investor confidence cannot be taken for granted," Gopal said.