Panthers Rushing Attack Too Much For Tigers 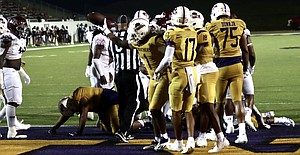 Prairie View A&M first-year head coach Bubba McDowell had been watching the forecast for the Panthers’ matchup against Texas Southern in the Labor Day Classic all week.

He knew the weather would be bad on Saturday with heavy rain projected to hover over Blackshear Field, yet it did not change his game plan.

From the first day he was promoted from assistant coach to head coach, McDowell knew that he had two dominating players on the offensive side of the ball.

Add a punishing offensive line and a dual-threat quarterback in redshirt junior Trazon Connley. The Panthers have an opportunity to return to the Southwestern Athletic Conference Championship Game representing the Western Division.

Sophomore Ja’den Stewart and junior Ahmad Antoine put on a rushing clinic in the Panthers’ 40-23 victory over the Tigers on Saturday. The two running backs combined for 236 yards and three touchdowns on 46 carries. Stewart finished the game as the leading rusher with 119 yards, while Antoine also eclipsed the 100-yard mark with 115 yards.

“We knew with the rain coming in that it was going to be very hard to throw the ball, so we had to rely on that running game,” said coach McDowell. “Those guys up front (offensive lineman) did what they were supposed to do as well as the backs.”

Prairie View is no stranger to the “Ground and Pound” game as they finished second in the SWAC in rushing yards last season with 1,934 yards, equating to 161.2 yards per game.

Most of that came from Ja’den Stewart’s determination as he completed his freshman campaign rushing for 664 yards and seven scores. Those numbers were good enough to have him voted onto the 2022 Preseason All-SWAC Second Team.

“It’s always a fun game playing TSU,” said Stewart. “They play hard, they have a good team, too. It’s good sportsmanship all the way around.”

Prairie View will be back in action on Saturday as they travel to take on Abilene Christian. Kickoff is 7 p.m. CST.