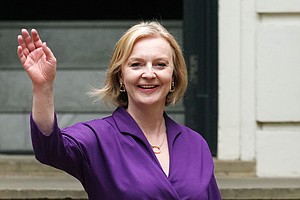 (CNN) -- Liz Truss officially became the third female prime minister in British history on Tuesday following a transfer of power from her predecessor, Boris Johnson, who bowed out in a defiant speech following a series of scandals.

Boris Johnson addressed the nation for the final time as British Prime Minister from Downing Street. Johnson resigned following a series of scandals and will be succeeded by former Foreign Secretary Liz Truss. Source: CNN

Truss, 47, enters office after winning the most votes in the Conservative Party leadership contest to replace Johnson, who announced his resignation in July. Her appointment fills a monthslong leadership void that the United Kingdom has endured as its worst economic crisis in decades has spiraled.

Truss's to-do list is long, with the country facing a deepening cost-of-living crisis, a crumbling healthcare service, and a seemingly endless wave of labor strikes.

The most urgent problem Truss must address is the skyrocketing cost of energy, which could unleash a wave of business closures and force millions of Britons to choose between putting food on the table and heating their homes this winter. Experts have warned that people will become destitute and cold-weather deaths will rise unless something is done fast.

The Bank of England anticipates that inflation in the UK will jump to 13% as the energy crisis intensifies, and that the country will enter recession before the end of the year. Goldman Sachs has warned inflation could even reach 22% if natural gas prices "remain elevated at current levels."

Truss was formally installed as prime minister on Tuesday after visiting Queen Elizabeth II at Balmoral Castle, one the royal estates in Scotland, in a break with norms.

Traditionally, the Queen invites a new prime minister to form a government during an audience at London's Buckingham Palace -- but for the first time in her 70-year reign, the monarch chose not to travel to the British capital as a precaution due to her mobility issues.

Truss's meeting with the monarch took place shortly after Johnson met with the Queen to officially resign as prime minister.

In his farewell speech outside Downing Street early Tuesday, Johnson touted his achievements, made no mention of failures, and pledged to support Truss' new government.

"Like Cincinnatus, I am returning to my plow, and I will be offering this government nothing but my fervent support," referring to a Roman statesman who according to legend devoted himself to the republic during times of crisis. "It's time for us all to get behind Liz Truss and her team and her program."

On her return to London, Truss is set to be welcomed at Downing Street by her new staff. Then she will be asked to sign the UK's famous letters of last resort -- instructions for military leaders on what to do if the government falls or is taken out in a nuclear attack -- before she begins appointing a cabinet.

Truss will also be expected to outline her plans for dealing with the UK's urgent cost-of-living crisis as soon as possible. Her political opponents, both inside and outside the Conservative Party, will not deem it acceptable if the new leader fails to outline specific policies in the next 48 hours.

Truss will then face the leader of the opposition Labour Party, Keir Starmer, for her first Prime Minister's Questions in the House of Commons on Wednesday afternoon, which will be seen by her team as an important moment to set the tone of her leadership.

Particular attention will be paid to how much Truss deviate's from Johnson's legislative agenda, particularly as she was seen as the Johnson continuity candidate in the leadership race.

Who is Liz Truss?

Truss, who served most recently as foreign minister in Johnson's government, follows Margaret Thatcher and Theresa May to become Britain's third female premier.

In recent years, Truss has been compared to Thatcher, who, for many on the right, remains the benchmark for Conservative leaders. She was a tax-cutting, hard-nosed leader who took on the unions and played a large role in ending the Cold War. Like Thatcher, Truss has come from relatively humble beginnings to dominate a world inhabited largely by men.

Truss ran her leadership campaign on a classic Conservative platform, promising tax cuts for citizens and no new taxes for businesses, including ruling out a windfall tax on energy companies to deal with the UK's cost-of-living crisis.

Analysts are skeptical that Truss's tax-cutting policies will do much help citizens, especially after a decade of Conservative austerity policies. The Institute for Fiscal Studies, an independent research group focusing on public finances, said last month that Truss and leadership rival Rishi Sunak, who were both promising tax cuts and smaller government spending, "need to recognise this even greater-than-usual uncertainty in the public finances."

But critics have accused her new-found hardline Brexit stance of being a cynical ploy. They have pointed to the fact that throughout her adult life Truss has evolved, from being an anti-monarchist Liberal Democrat in favor of legalizing drugs in her youth to the embodiment of the Conservative right today.

Before the Brexit referendum, Truss said that she was "backing remain as I believe it is in Britain's economic interest and means we can focus on vital economic and social reform at home." Cabinet colleagues at the time said she never voiced any opposition to staying in the EU, despite having ample opportunities to do so.

These days, Truss is more than happy to pick fights with Brussels and to claim that it was the EU all along that held the British economy back.

Truss' victory over Sunak, the former finance secretary, was smaller than expected, which means she may have to accommodate a wider range of views from her party. That could entail embracing more of Sunak's ideas around the cost-of-living crisis, and a less aggressive approach to tax cuts.

Many Conservative MPs are privately worried that Truss' modern-day Thatcherism could cost them the next election, and will be leaping on the surprisingly low margin of victory to encourage her to soften her economic stance.