Election administrators are under attack in Texas. Here’s what that means for the midterms.

David Becker of The Center for Election Innovation & Research talks with The Texas Tribune and ProPublica about election official turnover and its impact on voting.

By Jeremy Schwartz, The Texas Tribune and Photography By Miguel Gutierrez Jr 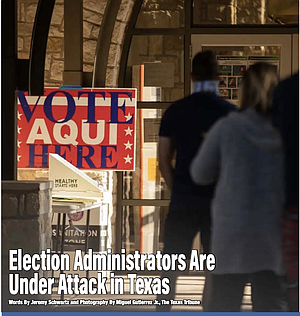 With the 2022 midterms less than a month away, election administrators in Texas and elsewhere continue to face a level of harassment and threats that experts say had never been experienced before the November 2020 presidential election.

In August, the entire staff of the elections office in Gillespie County, about 80 miles west of Austin, resigned, citing threats, “dangerous misinformation” and a lack of resources. The same month, Bexar County elections administrator Jacque Callanen told KSAT, a San Antonio news station, that her department was confronting similar challenges.

“We’re under attack,” Callanen said.“Threats, meanness, ugliness.” She added that staff members were drowning in frivolous open-records requests for mail ballots and applications. Texas is one of several states targeted by right-wing activists who are seeking to throw out voter registrations and ballots, according to The New York Times.

The instances follow reporting from ProPublica and The Texas Tribune, which last year detailed the case of Michele Carew, an elections administrator in Hood County, a staunchly Republican area an hour southwest of Fort Worth. Then-President Donald Trump received 81% of the vote in Hood County in 2020. But Trump loyalists mounted a monthslong effort to oust Carew, a Republican, alleging disloyalty and liberal bias. Carew defended herself from the attacks, surviving a motion to terminate her, before resigning from the position in October 2021.

Elections officials like Carew are increasingly feeling pressure to prioritize partisan interests over a fair democratic elections process, according to a study released last year by the nonpartisan Brennan Center for Justice and the Bipartisan Policy Center. The study, which interviewed more than three dozen elections administrators, found that 78% believe misinformation and disinformation spread on social media has made their jobs harder, with more than half saying the position has become more dangerous.

In Texas, about one-third of election administrators have left their jobs in the past two years, according to surveys conducted this year by the secretary of state’s office. State officials said data prior to 2020 is less reliable, making it difficult to compare the rates over time.

Get our biggest scoops and breaking stories, delivered to your inbox

The levels of distrust that have come to dominate the political landscape in Texas, a state that Trump carried with relative ease, should be cause for concern, says David Becker, the founder and executive director of The Center for Election Innovation & Research, a nonprofit focused on ensuring accessible and secure elections for all eligible voters. He previously directed the elections program at Pew Charitable Trusts, where he led development of the Electronic Registration Information Center, which has helped 33 states, some led by Democrats and others by Republicans, update millions of out-of-date voter records. Before that, Becker helped oversee voting rights enforcement for the Department of Justice under Presidents Bill Clinton, a Democrat, and George W. Bush, a Republican.

I recently sat down with Becker, the coauthor of the book “The Big Truth: Upholding Democracy in the Age of the Big Lie,” to talk about the realities facing elections administrators in Texas and across the country ahead of the 2022 midterms.

When we talked a year ago about Michele Carew, you said Texas’ new voting restrictions, a push by GOP activists to seize control of local party precincts and efforts to delegitimize the elections process in places like Hood County could have a chilling effect that drives out a generation of independent elections administrators. Do you feel like that is coming to fruition?

I think the risk definitely is still there. It is very difficult to get hard quantitative data on this, mainly because the definition of an election administrator is not always consistent across the states. We won’t really get a good sense of that until after the [2022] election.

What I do know is, on a state-by-state basis, I’ve heard pretty good evidence that states like California, New York, North Carolina, Pennsylvania and several other states are seeing unprecedented departures of chief county election officials. In some cases, somewhere in the range of around 30% or 45% are leaving in a two-year period. That’s very, very high. I know from talking to election officials privately that many of them are considering whether or not they can stay in these jobs, because the harassment is so great.

The best-case scenario for election officials on the Wednesday after an election is anonymity. No one’s talking about the election because everything went smoothly and everyone’s moved on.

We’ve been in a position where election officials actually achieved probably the greatest success in American democratic process in history [in 2020]. They somehow managed the highest turnout we’ve ever had, during a global pandemic, and withstood incredible scrutiny. And, despite that success, the exact opposite has been spread about them. They are suffering an enormous amount of stress and harassment and abuse, and in some cases threats. So it’s normal for them to ask, “Should I keep doing this? Can I do this to my family?”

We are seeing candidates who have denied the outcome of the 2020 election now running for secretary of state, attorney general and election management positions at the county and precinct level around the country. Are you concerned about what this could mean for elections in the future?

I think it’s important to assess where the risks actually are. It is difficult — not impossible, but difficult — to anoint the loser of an election as the winner. We saw that in 2020. Even under enormous stress, with the White House itself being behind a lot of it, the courts have held up.

I don’t want to say I’m completely sanguine about that not happening, but I think it’s a lower concern for me than the concern of the rhetoric being used by someone in a position of power, as we saw with former President Trump.

If you have someone in a position of power who is spreading lies about an election, who’s trying to create an incendiary environment where the supporters of a losing candidate are going to get more upset, we could see a lot of little Jan. 6s all over the place. (This refers to the deadly Jan. 6 insurrection in the U.S. Capitol.)

You write in your book that election denialism and skepticism have only grown among some Republicans since 2020, despite evidence that the presidential election was not marred by widespread fraud. Why do you believe the sentiment increased?

We are almost exactly 700 days since the November 2020 election, and the losing presidential candidate has had an opportunity to present and find as much evidence as possible. He had over 60 courts to do that in, including in front of judges appointed by himself. He has had months and months to collect evidence. In 700 days, they’ve gotten nothing. Literally, not a shred of evidence has been demonstrated to indicate the outcome was wrong.

Nevertheless, the doubts have persisted, if not grown. I think it comes from the fact that there is kind of a warped incentive structure where the losing presidential candidate is getting rich off of spreading the lies, so he’s going to keep doing it. And then the ecosystem of grifters that surround him are also getting rich; they’re lining their pockets with small donations from people who are sincerely disappointed about the outcome of the election.

Who among us hasn’t suffered a bitter electoral disappointment in the last decade? But they have been targeted and taken advantage of, exploited because they live largely in media silos where they’re only hearing the echo chamber that the election was stolen because that comforts them, and the grifters know that. And so they know they can keep them bitter and angry and divided and donating.

Given some of the nationwide turnover in election administrators, what’s your level of optimism that the 2022 midterms will be carried out without major issues?

Where I find optimism is in institutions that have withheld so far, like the judiciary. I also find the most inspiration from election officials and others who have stood for a sense of duty to the Constitution.

Disclosure: The New York Times and the Texas secretary of state have been financial supporters of The Texas Tribune, a nonprofit, nonpartisan news organization that is funded in part by donations from members, foundations and corporate sponsors. Financial supporters play no role in the Tribune’s journalism. Find a complete https://www.texastribune.org/support-us/corporate-sponsors/

The Texas Tribune is a nonprofit, nonpartisan media organization that informs Texans — and engages with them — about public policy, politics, government and statewide issues.