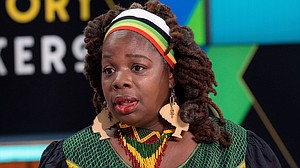 (CNN) -- An honorary member of Buckingham Palace has resigned and apologized after a Black charity founder said she was questioned about whether she was really British at a royal reception on Tuesday.

The guest, Ngozi Fulani, is the CEO of Sistah_Space, an organization that provides specialist services to women of African and Caribbean heritage affected by abuse.

Fulani was attending a royal function on domestic abuse organized by the Queen Consort on Tuesday evening when she said a member of staff began a line of questioning that the palace called "unacceptable and deeply regrettable."

Sistah_Space shared a rough transcript of the conversation on Twitter on Wednesday. Fulani said that, after identifying herself as British-born, the person asked her "where do you really come from;" "where do your people come from;" and "when did you first come here?"

A Buckingham Palace spokesperson acknowledged the incident and said the palace was taking the situation "extremely seriously."

"Unacceptable and deeply regrettable comments have been made. We have reached out to Ngozi Fulani on this matter, and are inviting her to discuss all elements of her experience in person if she wishes," the spokesperson said.

"In the meantime, the individual concerned would like to express her profound apologies for the hurt caused and has stepped aside from her honorary role with immediate effect."

News of the encounter came to light as the Prince and Princess of Wales traveled to the US ahead of the second iteration of the Earthshot Prize Awards later this week.

A spokesman for William said: "Racism has no place in our society, these comments were unacceptable. It's right that the individual concerned has stepped down."

The incident is likely to revive concerns that the palace is elitist and out of touch when it comes to issues of race and identity.

The palace has, in recent years, faced allegations of racist behavior, including in its hiring practices decades ago and the treatment of Meghan, Duchess of Sussex. A former counterterrorism police chief said Tuesday that Meghan and Harry had faced "disgusting and very real" threats from right-wing extremists.

Meghan claimed in an interview with Oprah Winfrey last year that an unnamed member of the family made remarks about the skin color of their unborn baby while she was pregnant with Archie.

Prince William later said the royal family was "very much not a racist family."