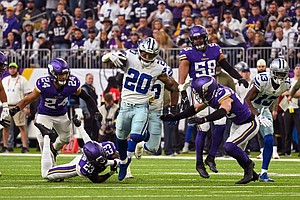 (CNN) -- Despite a seven-game win streak under their belt, the high-flying Minnesota Vikings had a rude awakening at home on Sunday, taking a 40-3 battering from the Dallas Cowboys.

The Vikings started Week 11 looking strong, but instead came away with their second-largest home loss in franchise history.

Cowboys running back Tony Pollard had two touchdown catches with a career-high 189 total yards from scrimmage, while Ezekiel Elliott -- who sat two games out with a knee injury -- ran for two TDs on 15 carries to help power the Dallas offense.

But the defense carried the day for the Cowboys. Not only did Dallas hold Minnesota to 0 points in the final three quarters and sack Vikings QB Kirk Cousins a career-most seven times on Sunday, but they also snapped the quarterback's streak of 39 straight games -- at the time, the longest active streak in the NFL -- with a passing touchdown.

"We kind of found our formula: just running the ball, pounding the defense, dominating on all phases of the game," Pollard said after the game.

But despite the Cowboys' dominance from start to finish, the game wasn't without some drama. Just before halftime, Dallas kicker Brett Maher squeezed in a 60-yard field goal, but as the Cowboys celebrated, officials went back to review wide receiver CeeDee Lamb's catch prior to the kicker's attempt.

Forced to try again after the play was upheld, Maher headed back to his spot for another difficult 60-yard attempt -- and delivered.

"There was a lot of emotion," Maher said. "I didn't hear a whistle or anything during the kick, before the kick or anything like that. So the emotions were already kind of out there after I made the first one. To be able to back down and (regather) myself to where I needed to be, I'm very happy with how I handled it."

While the loss was a shock to the system, Vikings head coach Kevin O'Connell said he thinks his team can do better when they host the New England Patriots on Thanksgiving.

"This is going to be an unbelievable challenge for our team. Four days from now, we'll be right back here, like I said, against a good football team. I'm willing to put everything we got into this game on a short week. And I trust our guys and what we've built here to respond the right way," he said.

Meanwhile, the Cowboys will host the New York Giants that same day.