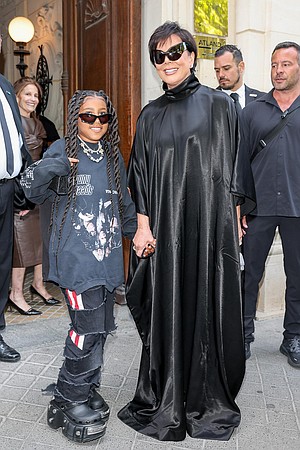 (CNN) -- While the world is seemingly one big runway for Kim Kardashian, today saw her stepping onto an actual catwalk at Balenciaga's latest show during Paris Haute Couture Week.

Held at the original Balenciaga couture salon on Wednesday, Kardashian walked the show in a full-length black gown with sweetheart neckline, built-in gloves and boots -- a signature silhouette of the label. It was a family affair on the front-row, too, with her daughter North West and mother Kris Jenner also present.

Although she has walked for LA Fashion Week and her sister's label Dash back in the late 2000s, this is Kardashian's first Paris Fashion Week show and arguably her most prestigious modeling accolade yet.

Kardashian joined a sleuth of A-listers walking for Balenciaga including Nicole Kidman, Dua Lipa, Bella Hadid and Naomi Campbell who were all cast in the show. Supermodel icon Campbell was seen bursting through the salon's curtained door frames in a voluminous high-shine black ball gown complete with tall structured collar, while actor Nicole Kidman resurrected her modeling career from the 1980s for the occasion. The first half of the catwalk featured models wearing glossy black full-coverage facemasks, highlighting the famous faces even further.

Balenciaga's decision to cast a star-studded show may be part of the brand's mission to open up the exclusive world of couture to the mainstream. On Wednesday, the same day as its show, it unveiled a "couture store" inside the historic 1937 Parisian salon. CEO, Cédric Charbit, said in a press statement he wanted to demystify the "very closed universe" of haute couture by allowing younger consumers to see exclusive pieces up-close and learn about the all-important ateliers.

Kardashian's professional relationship with creative director Denma and Balenciaga reached new heights this year when she was announced as the face of the brand in February. Previously, she had worn Balenciaga designs to a number of high-profile events, including a head-to-toe black masked look at the 2021 Met Gala and a hot pink spandex ensemble which she wore while presenting Saturday Night Live later that year. "Walked in my first Paris Fashion Week show and a couture show at that!" she wrote on Instagram stories. "OMG! A dream come true. Thank you Balenciaga and Demna."