Robert Downey Jr. pays tribute to his late dad in the intimate 'Sr.' 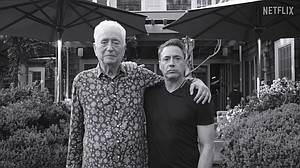 (CNN) -- At the end of "Sr.," a documentary so personal the word "intimate" almost doesn't do it justice, Robert Downey Jr. ponders what his 90-minute ode to his father was really all about. The simple answer, stripped of celebrity, is the painful process of saying goodbye to an aging, increasingly infirm parent, filtered through the careers of these two entertainers.

Downey Jr.'s fame, obviously, has eclipsed that of his father in terms of recognition and popular footprint, thanks to an improbable comeback with the role of Iron Man in 2008, and all that has followed since then.

Yet as he's quick to point out, and director Chris Smith ably illustrates, Downey Sr. made his own unique contributions to the culture as an underground filmmaker, appearing as a guest to talk about his work on Dick Cavett's show, and garnering the kind of prestige that allowed him to careen from one low-budget project to the next.

Downey Jr. was an occasional actor as a child in his father's films, and later asks his dad, uncomfortably, about their shared excesses with drug use, and the extent to which the elder man's permissiveness might have influenced his son. It's a conversation Downey Sr. clearly doesn't relish having, although their interplay throughout is one of warmth, forgiveness and love, and if there was second guessing or recriminations on the way to making that peace, you won't find it here.

For all its emotional aspects, with Downey Jr. sitting at his father's bedside before his death last year, "Sr." (a title the elder thinks they can improve upon) is also playful and amusing, incorporating the theme from "A Summer Place" to take the audience back to Downey Sr.'s heyday, when he directed films such as "Putney Swope" and "Chafed Elbows."

Part of that has to do with the elder Downey's wry responses in discussing his films, such as when he's asked whether people ascribe larger meaning to them. "Oh my god, I hope not," he deadpans.

The younger Downey's resume also figures prominently in the narrative, recalling early breakout roles like "Less Than Zero," in which he played an addict, as a sort-of omen for problems to come.

Shot over three years, the film captures Downey Sr.'s physical decline as he experiences the ravages of Parkinson's disease. Stripped to its core, though, "Sr." is a highly identifiable portrait of family and the sense that even when a parent dies in their 80s, the loss and grief is tough on those left behind.

"I'll miss him," Downey Jr. says after visiting the old man with his own young son, Exton.

Watching "Sr.," even those who never saw one of his films -- or indeed knew much about this showbiz family beyond the armored heroics -- might just miss him a little bit, too.