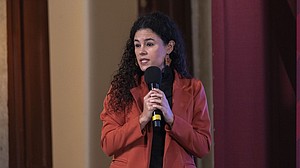 (CNN) -- Mexico's minimum wage will increase by 20% from 2023, the government announced on Thursday after it reached a deal with the labor and business sector.

The rise will begin on January 1, where the daily minimum wage will go from 172 Mexican pesos ($9) to 207 Mexican pesos ($10.82), Labor Minister Luisa Maria Alcalde announced during government press conference in Mexico City.

The agreement was reached unanimously between the government, the labor sector and the business sector, Alcalde said.