What India Couture Week reveals about this year's bridalwear trends 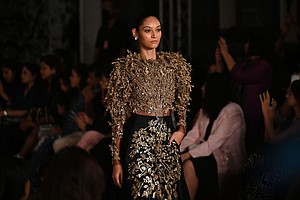 (CNN) -- More than a dozen leading designers showcased their creations at India Couture Week (ICW), offering a glimpse -- among much else -- at the bridalwear trends shaping one of the world's largest wedding markets.

The annual event's 15th edition, which concluded in the capital New Delhi this weekend, was the first staged on a physical runway since the start of the pandemic. All 13 of the participating couturiers used the opportunity to celebrate the rich heritage of Indian crafts and handwoven textiles in both Western and traditional South Asian silhouettes. As ever, bridalwear featured prominently.

"In India, wearing couture is part of bridal traditions, and many brides look to (India Couture Week) for cues as to what to wear," said Sunil Sethi, president of the Fashion Design Council of India (FCDI).

While European couture sets the tone for the exclusive world of high fashion, in India it has a noticeable impact on people's spending behavior. This is particularly evident in the country's wedding industry, which before the pandemic was worth around $50 billion a year, and second only to the United States, according to a 2017 report by consultancy KPMG.

Crafts are the backbone of couture -- and they play an important role in the days-long ceremonies often dubbed "Big Fat Indian Weddings."

"Weddings in India have always been about grandeur and showmanship," said wedding planner Devika Narain. "Post-pandemic there has been a shift, (whereby) weddings have become more intimate -- and people want to create an experience. It is quality over quantity, and they are looking for something unique."

This extends to clothing. Narain said many Indian brides are happy to spend between 600,000 and 10 million rupees ($7,600 to $126,000) on wedding attire alone. "Don't forget: Indian weddings involve more than one function," she said. "So multiple ensembles are needed."

Speaking to CNN ahead of his ICW presentation Saturday, designer Amit Aggarwal, who is known for playing with upcycled materials and deconstructing traditional silhouettes, said that today's grooms and brides are no longer going to just one designer. "Now they want to look different at every function, (ranging) from traditional to experimental," he said. "And of course, they must be Instagram-friendly."

Here is a roundup of the key bridal trends that came out of 2022's India Couture Week.

A move towards lighter shades was evident throughout ICW 2022. Almost half of designer Tarun Tahiliani's collection was in shades of beige, oyster, biscuit and the palest of mauves. Anju Modi and Anamika Khanna both opted for ivory-colored pieces, with the latter embellishing her designs with pearls and the former mixing and matching with burgundy and coral pink. Rahul Mishra meanwhile used bright colors for surface ornamentations but, in many cases, kept base fabrics light.

Mishra said the shift is down to changing preferences among Generation Z. Traditionally, wedding ceremonies were held in the early evening, with brides quickly changing into their reception outfits straight afterwards. Now, as couples look to keep the ceremony more intimate and the reception as an evening to party the night away, the rules of bridal dressing have changed in turn. "With the wedding being in the daytime, brides are preferring softer colors and no longer feel the need to stick to red," Mishra said.

Ceremonies being treated as standalone events has had another knock-on effect on wedding wear, according to Nandini Bhalla, the editor of Brides Today. "It has given brides a free pass to wear whatever they like at their reception," she said. "And I think this is the reason we are seeing so much cocktail wear -- and gowns -- at (India Couture) Week."

Many of the evening looks on the runway fused Indian and Western styles, such as Varun Bahl's draped dresses with floral embroidered applique work and Rahul Mishra's black and gold draped suit ensembles. House of Valaya founder JJ Valaya paired a black and ivory-colored chevron sari with a velvet embroidered jacket, while luxury brand Falguni Shane Peacock's lehengas had a ballgown feel. Amit Aggarwal, who is known for new-age silhouettes, deconstructed the lehenga with his three-dimensional skirts and re-engineered dupattas.

"You have to remember an Indian wedding is not only about the brides, it's about her sisters, the bridesmaids and other guests who want pieces they can wear again and again," said Bhalla.

The humble blouse was once among the most overlooked parts of the Indian ensemble -- but not anymore. Unapologetically low necklines and cropped, barely-there blouses are a common sight in today's India, Bhalla said. "This would not have been the case ten years ago," she added. "The whole body-positivity conversation has changed this, and now women of all sizes want to rock a crop top."

This has impacted wedding wear, too, whether it was Tarun Tahiliani's use of flossing, JJ Valaya's scoop necklines paired with a belt, Varun Bahl's spaghetti strapped itsy-bitsy blouses or Anamika Khanna's tribal infused bra tops.

There was more men's clothing on display than at any previous edition of ICW, according to FDCI president Sunil Sethi.

Nearly every couturier showed some, with menswear designer Kunal Rawal also invited to make his ICW debut (though his show did include women wearing "boyfriend" kurtas, with Rawal stressing that many of his clothes are "genderless"). There was a new energy and a focus on "groomswear," specifically.

"A groom's attire would (traditionally) be chosen by an aunt or a family member, but not anymore," Rawal said. "Men want something unique and something that speaks of them."

From Suneet Varma's decadently embroidered red sherwanis to Rohit Gandhi and Rahul Khanna's layered kurta suits, worn with embellished jackets, designs were geared towards men who want to make a statement. Siddartha Tytler include paired a kurta with a bomber jacket, adding a sense of fusion to his ensembles. And florals weren't only reserved for the brides, with both Mishra and Bahl's collections incorporating prominent flower motifs.

Top image caption: A model presents a creation by designer Tarun Tahiliani during the FDCI India Couture Week in New Delhi on July 22, 2022.

This article was updated with details of Alia Bhatt's wedding outfit.