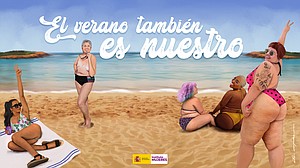 Spain's equality ministry launched the summer campaign Wednesday, featuring five women of varying ages and ethnicities on a sandy beach, with the slogan: "Summer is for us too."

But days after the campaign launched, some of the women whose bodies were featured claimed they were not asked whether their likenesses could be used.

British model and motivational speaker Sian Lord said she was left "shaking with rage" after seeing her image had been included in the ad and edited to remove her prosthetic leg, UK newspapers have reported.

Meanwhile, Juliet FitzPatrick, a British writer who has had a double mastectomy, said she believed "my face may have been used & superimposed onto the woman with one breast."

"Can you tell me what images were used to make this woman.I have no breasts & am unhappy if my face has been put on a body with one," FitzPatrick wrote to the ministry on Twitter on Sunday.

"I got messages on Saturday, from on Twitter and Instagram, asking if it was me in the poster, the one with a mastectomy, and I kind of looked at it and thought, no, it actually isn't me, mainly because I have no breasts," FitzPatrick told CNN.

FitzPatrick, who had one breast removed in 2016 and the second in 2017, told CNN she was later contacted by photographer Ami Barwell, who told her she believed the artist had used a photo Barwell had taken of FitzPatrick for her "Mastectomy" photo series.

"We are reasonably sure that it's my face superimposed on another photo that she took of a different woman with one breast," FitzPatrick explained.

"It made me feel pretty cross to start with, because you can't just use other people's images. And it also made me upset because I lived with one breast for about 18 months and really hated it," she said.

"I think it actually invalidates the whole campaign and what they're trying to do because it's all about body positivity, being comfortable in your body, you know, no need to hide things," she said.

"And actually what they've done is they've taken women's bodies and used them as they want, chopped them up, however they felt like it. because, of course Sian has a prosthetic leg in reality, but they have removed that prosthetic leg and replaced it with a flesh and bone leg," she added.

FitzPatrick's claims came after British model Nyome Nicholas-Williams said she was alerted last week that an image of herself wearing a bikini had been used in the ad without her consent.

Nicholas-Williams encouraged her Instagram followers to "keep the conversation going so that the Spanish Government can understand how wrong this is" and spoke of the importance of consent.

The artist, known as Arte Mapache, addressed the controversy with an apology on Twitter Thursday.

"First of all, I'd like to publicly apologize to the models for having been inspired by their photographs for the 'The summer is also ours' campaign and for having used a typography without a license (I thought it was free.)"

Arte Mapache added that following the "justified" controversy around the illustration, "I think that the best way to remedy the damages which could have occurred through my conduct is to distribute the benefits earned through this work in equal parts to all the protagonists of the poster and buying the license of the typography (I'm getting in content with everyone to resolve this as soon as possible)." The artist added that they were paid a total of €4,490 ($4,600) for the work.

"It was never my intention to abuse their image, but rather to transfer to my illustration the inspiration that women like Nyome Nicholas, Raissa Galvão are to me... Their work and their image should be respected. Thanks for your work, including in this case."

In a tweet, the Institute of Women, an independent organization attached to the Ministry of Health, Social Services and Equality, on Thursday thanked Arte Mapache for their "anti-fatphobia activism" and for recognizing the error with the illustration.

"The Instituto de las Mujeres wants to clarify that at no time was it aware that the women who appear in the images were real people," a spokesperson for the institute told CNN on Monday.

"The work contracted was the elaboration of an illustration, without the use of models. The Instituto de las Mujeres, as an injured party, have contacted the models to clarify the situation, and are waiting for the illustrator and the models to reach an agreement," they added.