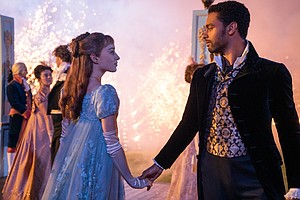 "Bridgerton" has gifted the world with the heat that is the Duke of Hastings, Simon Basset and Daphne Bridgerton.

But don't look for that to be replicated in real life.

Regé-Jean Page, who plays the Duke, shot down rumors that he was dating his costar Phoebe Dynevor during a joint interview with her.

"I think everything you need to know is on camera," he told Access. "That's why we presented it so beautifully for you. All the sparks that flew off of the beautiful scripts that we were handed, and so I think that the sparky scripted material are more than enough."

The Regency-era romance series has been a huge hit for Netflix, which projected viewership of 63 million households in the first four weeks since it debuted on Christmas Day.