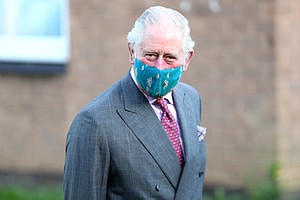 (CNN) -- Prince Charles is leading a fresh charge to tackle the climate crisis, this time with the support of several major companies including Bank of America and BP.

The Prince of Wales is launching a "Terra Carta," or Earth Charter, and urging other firms to commit to practical action to set the planet on a more sustainable trajectory. One goal is to direct $10 billion to green causes by 2022.

The charter, which will be unveiled during the One Planet Summit in Paris on Monday, seeks to protect the world's natural resources and accelerate the transition to a greener future. It contains nearly 100 actions that businesses can take, including a commitment to achieving net zero emissions by 2050 or sooner and protecting natural ecosystems.

In an exclusive interview with CNN Business on Monday, Prince Charles said that "we have to be much more ambitious" and bring forward efforts to achieve net zero emissions from 2050 to 2035. Very few listed companies have climate action plans in place and there are still "a lot more people to convince," he told Richard Quest of Quest Means Business.

The fact that the United States is poised to rejoin the Paris Agreement under President-elect Joe Biden "will make an enormous difference and help to leverage even further support around the world," he added.

A lifelong environmentalist and heir to the British throne, the Prince of Wales warned at last year's World Economic Forum in Davos, Switzerland that the planet faces disaster without a revolution in the way the global economy and financial markets work.

"What good is all the extra wealth in the world, gained from 'business as usual,' if you can do nothing with it except watch it burn in catastrophic conditions?," he said in an interview with CNN at the annual gathering of the global elite.

At that event, he launched the Sustainable Markets Initiative (SMI), co-chaired by Bank of America CEO Brian Moynihan, to put people and planet "at the heart of global value creation."

The Terra Carta serves as the "guiding mandate" of the SMI, according to a statement issued by the SMI on Monday. It will be updated annually over the next ten years.

One of the initiatives arising out of the charter is a private sector alliance that aims to invest $10 billion in "natural capital" by 2022, including regenerative farming and biofuels.

It will direct money to businesses that try to harness or preserve the power of nature, such as those using nature-based materials or deploying zero waste strategies. It will also seek to capitalize on the growing number of companies investing in sustainable development projects in order to offset carbon emissions and reach net zero targets.