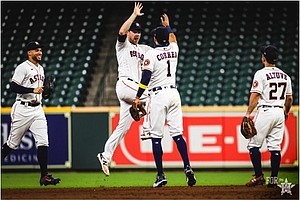 There is an old saying in sports that, “Every game counts.” No statement can be truer for the Houston Astros who find themselves in a playoff position battle with divisional foe Seattle Mariners. They are currently three games ahead of Seattle for second place in the American League West with 10 games left for the Astros that includes a three-game series at T-Mobile Park in Seattle.

“Right now, we are just trying to win every game we can win,” said Astros manager Dusty Baker who is looking to become the first manager in Major League Baseball history to take five different ball clubs to the postseason. “Hopefully we can put some distance on .500.”

Houston took two games from the Texas Rangers this past week, the last being a 2-1 gem from starting pitcher Framber Valdez who matched his season high in strikeouts with 11 in just 6 1/3 innings. The Astros (25-25) will now welcome in the Arizona Diamondbacks whose 19-32 record does not tell the story on just how good of a team they are. Earlier this season they were able to take two out of three games in Chase Field against the Astros which started a five-game losing streak in August.

“We have a tough three games this weekend and we know we have to outscore them because they (Arizona) can hit,” Baker said.

One thing manager Dusty Baker and hitting coach Alex Cintron (who returned to the bench after a 20-game suspension by the MLB for the verbal altercation with Oakland A’s center fielder Ramon Laureano) will focus on will be how to get the Astros bats firing on all cylinders again. Houston has all of its starting position players healthy and in the lineup for the first time since July, but they only produced six runs in the Rangers series and went scoreless in the second game of the series.

“This is a short season, so everything is magnified,” said Michael Brantley. “This is baseball. You are going to go through ups and downs. Hopefully we are having a conversation on Friday on how we scored 10 runs.”

If they do have an offensive outburst in these final three games at Minute Maid Park, it will make the road games against the Mariners next week that much more special and a little less stressful.